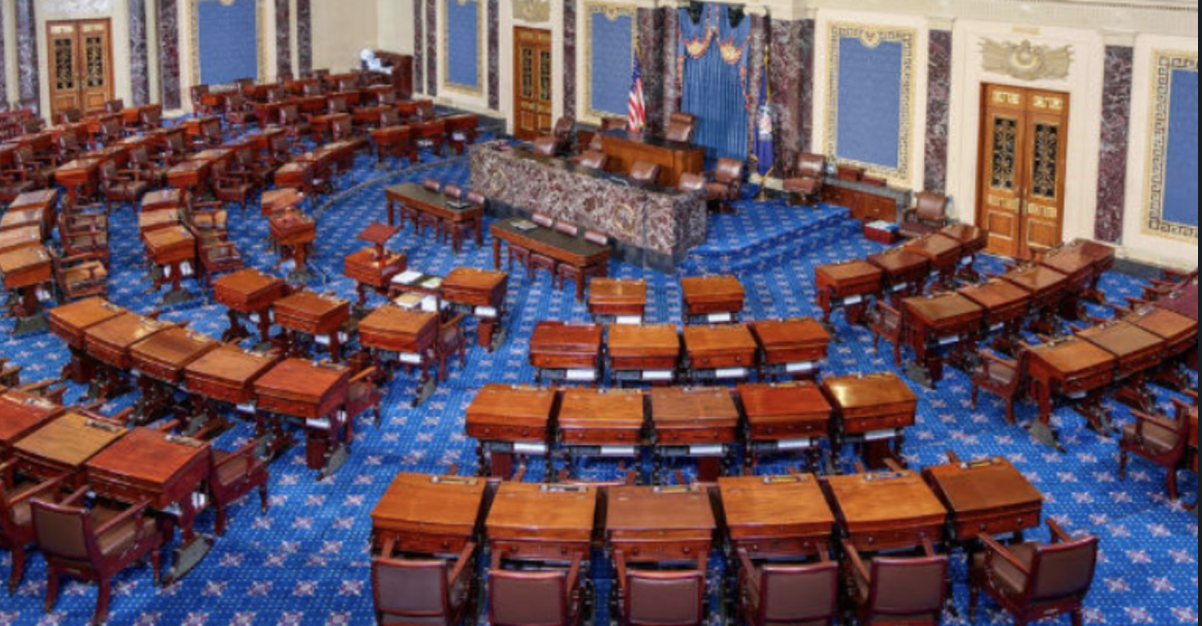 If a busy Friday kept you from reading this morning's SPENDING SCAM update, a final Senate vote is expected TOMORROW on the fake, $1.2-trillion "infrastructure" bill. (See below.) But, as RINOs and Democrats stand on the brink of pushing America into full-blown socialism, conservative Senators are pushing back against the SPENDING SCAM. Earlier this week, Breitbart News posted a joint statement released by seven Senate Republicans:

We can't spend money we don't have. Period. Just look at what is happening with inflation. We were promised this infrastructure bill was fully paid for, and now we see that it's not. ... Let's not forget, this is just the first step in the Democrats' plan to pass their $5.5 trillion tax-and-spend liberal wish list. We support infrastructure, but it has to be paid for. This proposal isn't it.

The 2,702-page, spending monstrosity wasn't even available to the full Senate until Sunday night. Yet, Senate Majority Leader Chuck Schumer (D-NY) wanted the legislation passed before the Upper Chamber's August recess, which was supposed to start today. With the Senate expected to vote on FINAL PASSAGE TOMORROW, now is the time to make your voice heard!

If you want GOP Senators to pull America back from the brink of socialism, take action now using Grassfire's unique FaxFire system. Click here or on the banner below now to rush your "Stop The Spending Scam!" faxes to 50 Senate Republicans and two moderate Democrats for just $30. Or reach ALL 100 U.S. Senators for only $50:

Schumer needs 60 votes for final passage of the $1.2-trillion SPENDING SCAM. That means at least 10 Republicans must vote "Yes" for the bill to become law. Demand GOP Senators stand firm and stay united to save America from socialism! Click here to send your "Stop The Spending Scam!" faxes now. Thanks, in advance, for taking immediate action.

P.S. Again, if you missed this morning's SPENDING SCAM update, please see below. Find out who was right about whether or not the fake, $1.2-trillion "infrastructure" bill is likely to raise your taxes. Take immediate action to "Stop The Spending Scam!" by going here to fax Senators now:

On Tuesday, Grassfire shared a Wall Street Journal opinion article about the SPENDING SCAM. The newspaper's editorial board wrote that the Senate's $1.2-trillion infrastructure bill "is full of phantom revenue gimmicks," "magical Medicare accounting" and "relies to a great degree on savings and revenue... that are unlikely to happen." They added that "politicians will spend now, and taxpayers will pay later."

On Wednesday, we told you how former House Speaker Newt Gingrich (R-GA) accused Republican Senators of getting "suckered" and "selling out to the Left" by supporting the 2,702-page "disaster." Grassfire also shared Rep. Jim Jordan's (R-OH) warning that Democrats are "getting ready to raise your taxes."

Yesterday, Democrats and RINOs negotiating the "bipartisan" legislation insisted it can be paid for without raising taxes. They claim: "The new spending under the bill is offset through a combination of new revenue and savings."

Also on Thursday, the Congressional Budget Office (CBO) revealed who was right and who was wrong. The CBO announced that the bill will add more than $256 billion to the U.S. deficit over the next ten years. That's a quarter of a TRILLION dollars by 2031! Hmmm... will the federal government borrow that money or get it from taxpayers? What do you think?

The weekend vote would clear the way for the Senate to take up a $3.5 trillion budget reconciliation plan that includes President Joe Biden's more partisan domestic priorities.

Democrats are tying this "smaller" legislation to a much larger $3.5-trillion, tax-and-spend package they want to ram through Congress by September. Through a process called "budget reconciliation," Schumer and House Speaker Nancy Pelosi (D-CA) could pass their socialist wish-list with a simple majority vote and ZERO REPUBLICAN SUPPORT!

Again, Senators are expected to vote on final passage of the $1.2-trillion SPENDING SCAM this weekend. That gives grassroots patriots just hours to make their voices heard. If you want to push back against turning America into a "woke," socialist, totalitarian state, take action now!

For just $30, you can reach ALL 50 Republican Senators, as well as Sens. Kyrsten Sinema (D-AZ) and Joe Manchin (D-WV). Both moderate Democrats have indicated they do NOT currently support the $3.5-trillion SPENDING SCAM. Click here or on the banner below to fax Senators now:

If you can, please "go the extra mile" and send LEVEL TWO faxes. You can reach all 100 U.S. Senators for only $50. That's half off the regular price! Go here.

The Unhinged Left is trying to use taxpayer money to fund and build a super highway to socialism. Tomorrow, Senators are expected to hold a final vote on a $1.2-trillion, fake "infrastructure" bill that Rep. Jordan says only spends about 10% on roads, bridges, etc.

Don't let the Senate "pour the cement" for a socialist foundation in America. Senate Republicans need to hear from grassroots conservatives like you now. Demand they follow Gingrich's advice and "Stop The Spending Scam!"

"This is something they should bail on. It was a mistake. It will be dramatically worse than they think," the former Speaker insisted on FOX News Tuesday night. "(T)he time has come to kill it, not to move it forward."

Click here to fax EVERY Senate Republican, plus moderate Democrat Sens. Sinema and Manchin, now. Rush your personalized "Stop The Spending Scam!" message to 52 U.S. Senators for only $30. Thanks, in advance, for taking action.

P.S. You can make your voice heard to stop Senate Minority "Leader" Mitch McConnell (R-KY) and his crash of RINOs from pushing America one giant step closer to full-blown socialism THIS WEEKEND. Click here or on the banner below to fax Senators and tell them to "Stop The Spending Scam!" now: