ELECTION UPDATE: We have the FRAUD CHARTS President Trump used! 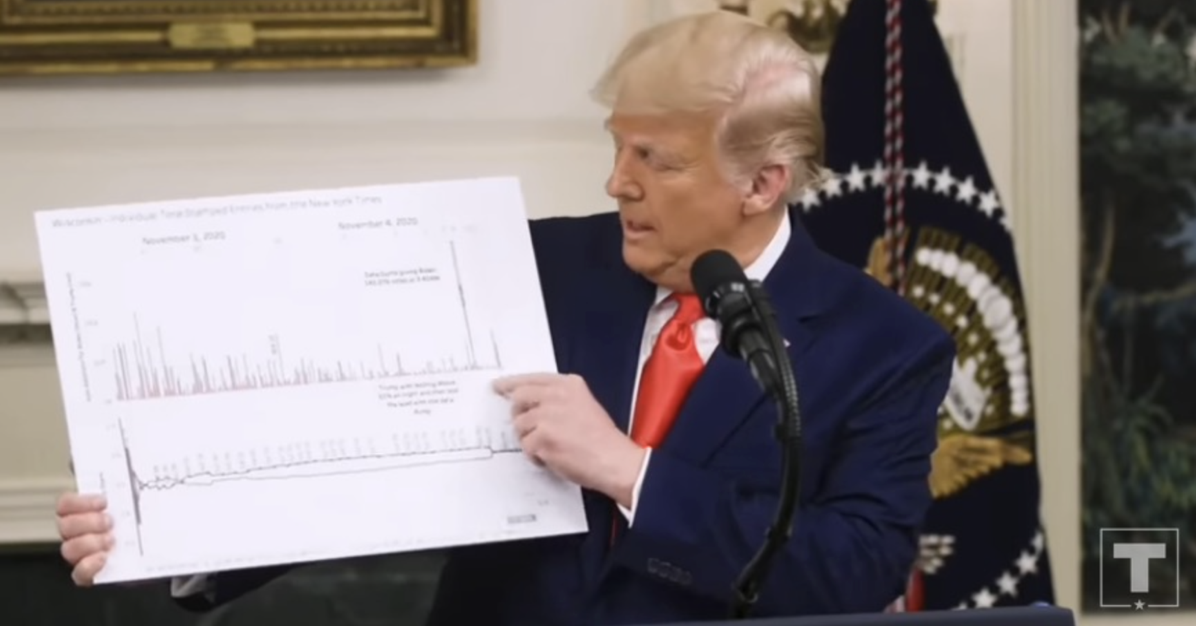 On Wednesday afternoon, President Trump gave what he said "may be the most important speech I've ever made." Our Commander-in-Chief spent nearly an hour taking his case against voter fraud and election interference directly to the American people. He provided extensive details and important context about his campaign's "ongoing efforts to expose the tremendous voter fraud and irregularities." (Click here to watch the President's speech.)

Grassfire wants to share some key points and compelling evidence from the 46-minute statement with our team members. Yesterday, we shared explosive video that shows poll workers in Georgia pulling cases of ballots out from under tables -- AFTER election monitors, reportedly, were told to leave. Evidence of other election "irregularities" shared by the President during his speech include:

+ + Stand With The President To Stop The Steal!" Fax Lawmakers Now!

Grassfire stands with President Trump, who also said on Wednesday: "The constitutional process must be allowed to continue... to defend the honesty of the vote." He added, "It’s about ensuring that Americans can have faith in this election and in all future elections." We agree. If you do, too, take immediate action to "Stop The Steal!"

This week, Grassfire updated our "Stop The Steal!" FaxFire -- at no extra cost -- by adding the governors of SEVEN states at the center of this fight: Arizona, Georgia, Michigan, Nevada, Pennsylvania, Virginia and Wisconsin. Our unique FaxFire system also targets an additional 16 lawmakers in four of those battleground states (Georgia, Michigan, Pennsylvania and Wisconsin), as well as ALL 53 Republicans in the U.S. Senate!

Democrats, Big Tech and FAKE NEWS don't decide who the president will be. We, the People choose our Commander-in-Chief! That's why grassroots patriots, like you, MUST keep fighting to "Stop The Steal"

COVID-19 opened a HUGE "Pandora's Box" of problems for America: physically, socially, economically, politically, etc. But, from the very beginning, the Unhinged Left saw the pandemic as an "opportunity." President Trump's re-election is the key to ending their tyranny.

American patriots like you, {{recipient.first_name_or_friend}}, know that -- and so do the socialists, Marxists and communists. That's why they've been fighting so hard over the past four years to defeat Donald Trump. This is another battle the President needs your help to win! Click here to fax 76 lawmakers now for less than $.40 each!

Take action now to demand House and Senate Republicans expose any and all voter fraud. (Click here to see a complete list of FaxFire targets and their contact info.) Thank you, in advance, for standing with America's Commander-in-Chief.