Tell Joe Biden and his regime: "I AM MAGA!" Take a stand with our new, exclusive, pro-Trump ReStickers. Reserve yours now for ANY AMOUNT.

Grassfire received word this morning that yesterday's "Stop Trump Attacks" update was "quarantined" by at least one popular, email provider. That means many of our team members may not have seen the news that Joe Biden's politicized, weaponized FBI and Department of "Justice" reportedly are targeting the friends and associates of President Trump.

Yesterday's subject line included the words "TYRANNY" and "Joe Biden." To "America First" patriots, those terms usually go hand in hand. But most of Big Tech walks in lockstep with The Regime, so having messages blocked, banned or sent to "spam" and "junk" folders doesn't really surprise the folks here at Grassfire. But what does concern us is censorship. 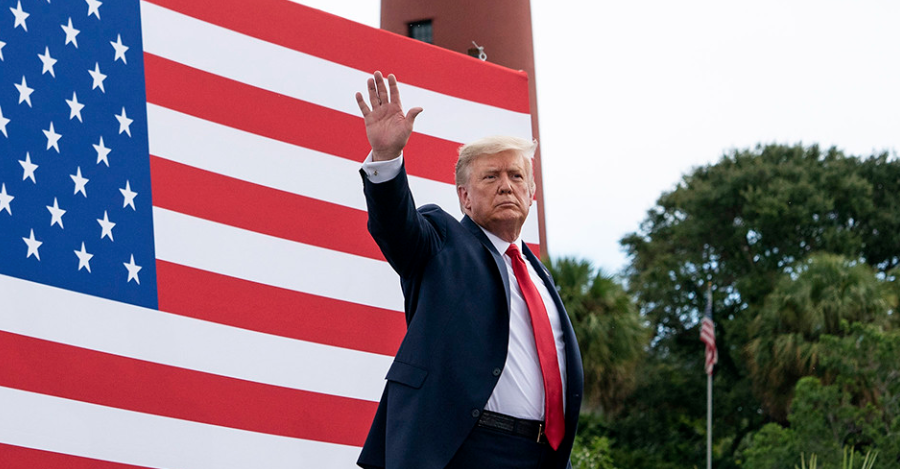 Grassfire should be able to communicate freely and openly with team members like you. When we can't, something's very wrong. That's the sense we get in America today -- that something IS very, very wrong.

Just spend a few minutes listening to Joe Biden, his fellow radical Democrats and the Unhinged Left. If you can subject yourself to hearing their hateful, vitriolic, anti-MAGA rhetoric trumpeted on the FAKE NEWS networks -- that so diligently and obediently carry The Regime's water -- their end game should become obvious to you almost instantly.

Over the weekend, Joe Biden, Kamala Harris, Sen. Elizabeth Warren (D-MA) and NBC News hack Chuck Todd used the 9/11 anniversary to demonize MAGA Republicans. They equated liberty-loving Americans, who demand free and fair elections, with terrorists who executed thousands and caused billions of dollars in damage. It's ridiculous, reprehensible and has to stop!

For full coverage of what you need to know about the Biden Regime targeting pro-MAGA, pro-Trump Americans, click here for Grassfire's LibertyNews Daily Feed.

What the Left is doing right now to demonize, bully, intimidate, subpoena and arrest their political opponents (74 million strong and counting) is the single most dangerous threat to our liberties we have faced in our lifetimes. (See our previous email for more on that.) Certainly, the short-term goal is to blunt any GOP gains in the mid-term elections by turning the attention away from the Left's failed policies: their devastating economic shutdowns, record-breaking inflation the open-border disaster, the fossil-fuel destroying Green-energy push and so many others.

They're using the most vile, hateful rhetoric to make "Orange Man" (President Trump) the enemy and accuse anyone who wears a MAGA hat of being a walking criminal. But it's even more than that. Empowering the White House and "Justice" Department to attack your political opponents is the definition of a banana republic and a dictatorship not ruled by law.

Click here or on the banner below now to instantly reach up to 40 Republican Senators and a dozen Representatives on Capitol Hill. Demand they take immediate action to stop Joe Biden's -- and his tyrannical regime's -- continued attacks against President Trump and "America First" patriots:

Not a VIP? Go here to send this FaxFire for just $6

+ + Call On The House And Senate GOP To Take Immediate Action To Stop The Biden Regime's Attacks!

Republicans in Congress and "America First" patriots across this great nation need to push back HARD and FAST. Grassfire and LibertyNEWS have been doing everything we can to draw attention to this crisis. We must do more. You must do more. We must stand for our liberties, or the FBI may come knocking at your door.

If you think that's an exaggeration, consider the mother in New Jersey, who openly supports President Trump on Facebook and recently received a visit from THREE federal agents. The day after "Dark Joe Biden's" MAGA-hate speech in Philadelphia two weeks ago, the FBI knocked on her door and reportedly said, "We got an anonymous tip you were at the Capitol on January 6." She wasn't, of course.

Seriously, can't the FBI find something better to do than visit suburban homemakers over bogus claims of "insurrection"? Shouldn't agents be more concerned with hunting down human traffickers, pedophiles and Jeffrey Epstein associates?

Instead, the politicized, weaponized Department of "Justice" is harassing America's 45th president and his supporters over an estimated 100 allegedly "classified" and/or "top secret" documents. It's important to note that the FBI was aware of and allowed President Trump to keep those files locked away at Mar-a-Lago. That is, until the bogus January 6 investigation wasn't getting the Democrats' desired results. Then, the FBI raided Mr. Trump's home.

Don't forget: The FBI gave Hillary Clinton a "pass" in 2016 after the agency found 110 emails with "classified information" on her home computer. She also failed to turn over "several thousand work-related emails." The FBI director at the time said Clinton and her cabal "were extremely careless in their handling of very sensitive, highly classified information." Yet, the DOJ chose not to pursue that case, even though Clinton DID NOT HAVE the executive privilege or presidential powers to which Donald Trump is entitled.

Yesterday, we warned you about what FOX News host Tucker Carlson called "a full-scale purge" against DOZENS of Donald Trump supporters by the FBI. Please see our previous update, or click here to demand GOP Senators and Reps take immediate action to "Stop Trump Attacks!" Thank you, in advance, for making your voice heard today.

P.S. Both the House and Senate are in session this week. That makes "now" the perfect time to stand with America's 45th president against the Biden regime. Grassfire is empowering our team members to make their voices heard utilizing our unique FaxFire system. You can call on Congress to take action and stop the attacks on President Trump and MAGA supporters. Click here or on the banner below to INSTANTLY fax 40 GOP Senators and a dozen Republican Representatives. Demand they "STOP TRUMP ATTACKS!" by sending your personalized message now:

Tell Joe Biden and his regime: "I AM MAGA!" Take a stand with our new, exclusive, pro-Trump ReStickers. Click here to reserve yours for ANY AMOUNT. Receive THREE for $30 or more when you help Grassfire build.