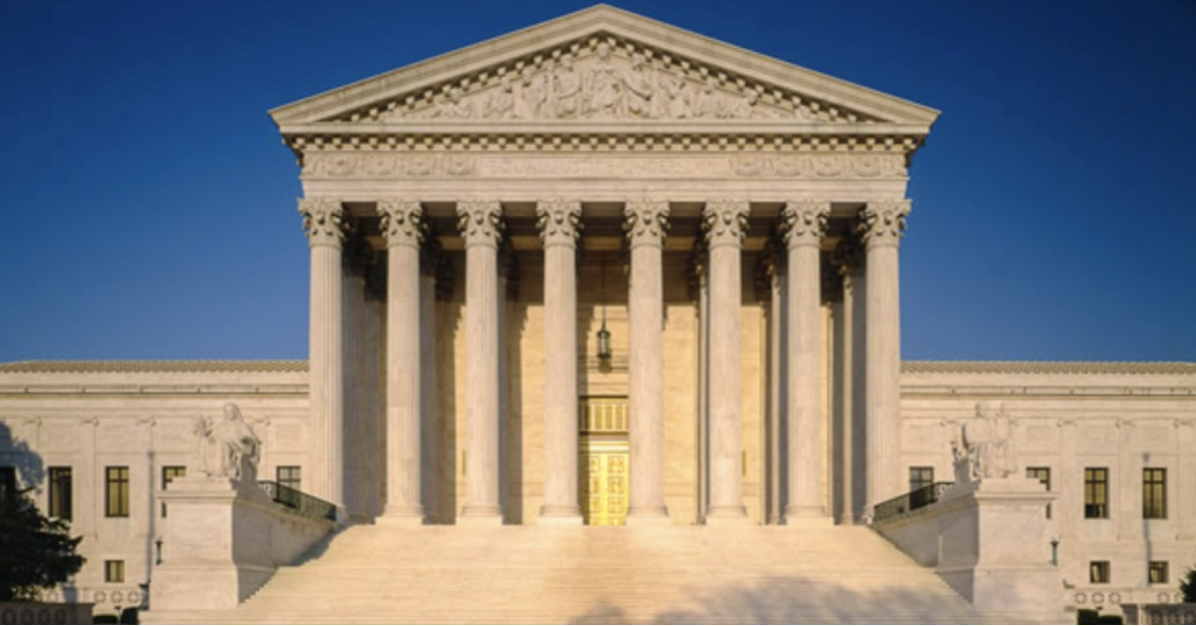 Joe Biden ridiculously claimed today that "all basic mainstream religions" are in line with Roe v. Wade. That is simply NOT true of Catholicism, a majority of protestant denominations, Islam and Judaism. But the landmark 1973 ruling created a constitutional "right" to abortion that, reportedly, a majority of current Supreme Court Justices say doesn't exist.

That news came yesterday, after POLITICO posted a 98-page draft ruling of an abortion case currently before America's High Court. The unprecedented leak of Justice Samuel Alito's unfinished majority decision has set off a firestorm of controversy. Mr. Biden doubled down on today's pro-abortion comments by adding:

"The idea that we're going to make a judgement that is going to say that no one can make the judgement to abort a child based on a decision by the Supreme Court, I think, goes way overboard."

Really? America is supposed to be a nation of laws. But should we follow only the laws we agree with now? It's ridiculous. Plus, Joe Biden's comments today reveal that he is NOT the "devout Catholic" that FAKE NEWS and the radical, unhinged Left want you to believe he is.

+ + Chief Justice Calls For An Investigation

Chief Justice John Roberts calls the leak a "betrayal" and has ordered an investigation to find POLITICO's source. He says the goal was to "undermine" the Supreme Court's "integrity." But Roberts insisted, "(I)t will not succeed. The work of the Court will not be affected in any way."

With Roe v. Wade likely to be overruled soon, Grassfire is predicting a full-court press against the Supreme Court by radical Democrats, the "woke" Left, FAKE NEWS and the failed Biden regime. We think America's political discourse will get even worse. That's why we're asking for your help today.

With only six months until the crucial midterm elections, Grassfire wants to gear up for the battles ahead. Your contribution of any amount will HELP US EMPOWER YOU to stand for life, liberty and limited government. Click here or on the banner below to support our grassroots efforts:

If you missed this morning's email about the Supreme Court leak, please see below. Grassfire's online news division, LibertyNEWS, released its daily news feed with the best, conservative-focused collection of headlines, articles and opinion about the breaking SCOTUS scandal. Keep reading to learn how you can get LibertyNEWS delivered to your inbox every weekday morning.

Your partnership is crucial to fulfilling our God-inspired mission to REPORT TRUTH that empowers you to TAKE ACTION. "America First" patriots are winning the "war" for the heart and soul of this great nation. Click here so we can help amplify YOUR VOICE in Washington, D.C. and beyond. Thank you, in advance, for your generous support today.

P.S. Chief Justice Roberts also called the leak an "egregious" breach of trust. Grassfire sees it as the beginning of another, extended meltdown by the crybaby, radical, unhinged Left. To help us empower YOU to push back against the "woke," progressive goal of "fundamentally transforming the United States of America," please support our grassroots efforts. Go here:

Someone working INSIDE the Supreme Court of the United States (SCOTUS) is suspected of "leaking" a 98-page draft ruling to the press. LibertyNEWS, Grassfire's online news division, says the High Court's decision AGAINST the so-called "right" to abortion wasn't expected to be released until next month.

POLITICO published the document yesterday, which Justice Samuel Alito reportedly wrote for the majority. The text seems to indicate that SCOTUS is set to OVERTURN the landmark, 1973 Roe v. Wade decision that legalized abortion. As expected, the radical, unhinged Left is FURIOUS!

Click here to see today's LibertyNEWS feed, which features the best, conservative-focused collection of news stories and headlines about the breaking SCOTUS scandal.

This "leak" of a Supreme Court draft is unprecedented and a direct threat against a critical, constitutionally established institution of our great nation. This is almost assuredly an intentional attempt to sway one of the five (or six) Justices who, apparently, have voted to strike down Roe v. Wade.

The pressure on these Justices will be enormous over the coming days until the opinion is finally released. America can expect a relentless political campaign driven by the radical, unhinged Left and FAKE NEWS aimed at minimizing and de-legitimizing the Supreme Court.

At Grassfire, we expect to hear news of death threats, of efforts to pack the court, of "impeaching" Justices and much more. Many right-thinking Americans have called for increased security and protection for Justices Thomas, Alito, Gorsuch, Kavanaugh, Barrett and Chief Justice Roberts. (If SCOTUS does hand down a 6-3 ruling, Roberts could write his own concurring opinion.)

+ + Help Grassfire Empower YOU To Fight Back!

This is one of the most significant ideological attacks by, presumably, the "woke," unhinged Left in American history. In the aftermath of this unprecedented leak AND the upcoming midterm elections, Grassfire is bracing for battles that will be unlike anything we've ever seen before.

The D.C. Swamp is deep. Radical Democrats, RINOs, the GOP Establishment, the Deep State, FAKE NEWS, Big Tech, Big Pharma, the East and West Coast "elite" and other "Enemies of Liberty" won't go down without a fight. So, Grassfire wants to empower you to push back against the coming "progressive" onslaught.

If you believe in the work of Grassfire -- if you want to help us multiply the grassroots army that can STAND WATCH FOR AMERICA at this critical time -- would you consider making a special gift today to help us REPORT TRUTH that empowers you to TAKE ACTION? Please go here to contribute now:

Grassfire offers an alternative to the new-media and social-media monopolies. We're one of the few online, grassroots-citizen networks that has both the strength in numbers and the online infrastructure to make a difference in the battle to save America from political correctness and tyranny.

This is a battle of good versus evil. It's a fight, literally, to save America. Our patriotic voice and independent channel of communication are so vital in these challenging times. We want to continue amplifying YOUR VOICE so you can stand for America's founding principles of life, liberty and limited government. Grassfire wants to grow and do more, but we urgently need your support. Click here to help.

To make an even bigger impact as a GrassfireVIP, click here. For your monthly contribution of $15 or more, you'll receive exclusive member benefits, including 80% FaxFire discounts, unlimited MyCongress faxes and our regular VIP News Digest email updates, featuring the best aggregate of online news sources for grassroots conservatives.

Our staff is committed to providing critical emails, news updates and action items that empower team members to FULLY ENGAGE in this constant, intensifying struggle for the heart and soul of our nation. Grassfire's God-inspired mission is to REPORT TRUTH so you can TAKE ACTION and expand your impact. Please stand with us by going here to contribute to our efforts. Thank you, in advance, for your support.

P.S. The radical, unhinged Left is melting down about the Supreme Court possibly overturning the landmark, 1973 Roe v. Wade decision legalizing abortion. But the actual BIG story today is the LEAK! It's one of the biggest, most despicable attacks on our constitutionally created institutions ever. Releasing a draft of a pending ruling is a gross breach of protocol. It is historic, unacceptable and indicates just how far the "Enemies of Liberty" will go when they don't get their way. Go here to help Grassfire empower you to stand watch for America: