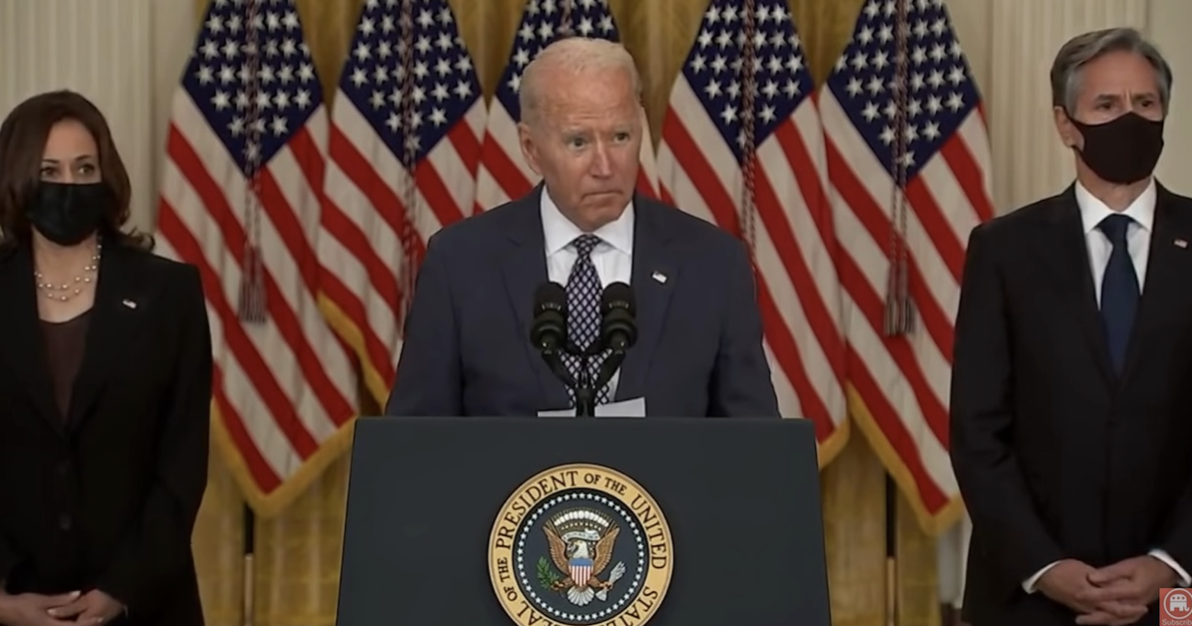 Joe Biden claimed in a news conference yesterday afternoon that Taliban terrorists are NOT preventing Americans from reaching the international airport in Kabul. But ABC News insisted that's simply not true.

In fact, Defense Secretary Lloyd Austin, who stood with Mr. Biden while he addressed the nation and answered five pre-selected questions from reporters, also contradicted the "Commander-in-Chief." The New York Post reports that Austin "told members of Congress on a conference call Friday that Americans attempting to evacuate Afghanistan have been beaten by the Taliban."

The Post quotes a "senior GOP lawmaker" who told the newspaper, "Within 30 minutes of Biden saying it publicly, the Secretary of Defense directly contradicted him." The lying and inaction by this administration is outrageous and totally unacceptable!

Thousands of American citizens are still under Taliban control. Joe Biden MUST get EVERY one of them home. Please see our previous update below for the complete details of how ABC News called out the "Commander-in-Chief" for his latest failure and falsehood regarding Afghanistan. He's putting American lives at risk, and that simply CANNOT continue.

To take immediate action, click here or on the banner below to fax Senators and demand the Biden regime to "BRING OUR PEOPLE HOME!" Thanks, in advance, for making your voice heard today.

Friday afternoon, Joe Biden spoke to reporters for the first time about his Afghanistan disaster, and he continued lying about Americans trapped in the Taliban-controlled nation. "We have no indication that they haven't been able to get in Kabul to the airport," Mr. Biden claimed.

"Just totally not," Pannell replied. "No indication Americans can't get to the airport? Last night on 'World News,' we had American citizens who had exactly that experience. They tried to get to the airport. ... They were beaten by the Taliban with the rubber fan belt from a vehicle."

Pannell insisted there are multiple examples of Americans trying repeatedly to get to the airport and not succeeding. He said of Mr. Biden's claims, "It just seems the reality and the rhetoric are miles apart. ... The truth on the ground is that these people, who are in fear of their lives, can't get through."

+ + Reagan: "Government's first duty is to protect the people."

If this infuriates you, it should! No American deserves to get left behind. President Ronald Reagan famously said, "Government's first duty is to protect the people." Yet, this week, the Biden regime sent a notice to those requesting evacuation from Afghanistan that contained this warning in bold, capital letters:

Also, Defense Secretary Lloyd Austin said at a press conference on Wednesday, "We don't have the capability to go out and collect large numbers of people." That's simply NOT TRUE! If called upon, Army Rangers, Marines, and Navy SEALs would do their job in a heartbeat.

Citing multiple media outlets, Army Times reported yesterday: "As the Defense Department continues to stick to its plans of not reaching out into Kabul to assist U.S. personnel and Afghan helpers evacuate, British and French forces have done so to rescue their citizens."

That's simply unacceptable and must change immediately! If you're outraged by the Biden regime's lies, failures and weakness, Grassfire wants to empower you to make your voice heard. Utilize our new "BRING OUR PEOPLE HOME!" FaxFire to demand Senators pressure Joe Biden and members of his administration to evacuate EVERY American from Afghanistan.

Click here or on the banner below to instantly fax your two Senators and all 50 Republican Senators, along with moderate Democrat Sens. Kyrsten Sinema (AZ) and Joe Manchin (WV). That's up to 54 faxes for only $30!

ATTENTION GRASSFIRE VIPS: GO HERE TO SEND YOUR "BRING OUR PEOPLE HOME!" FAXES FOR 80% OFF! Not a VIP? Go here to send this fax at an 80% discount. (Trouble accessing your benefits? Go here.)

An estimated 15,000 American citizens (or more) are trapped and waiting evacuation from Afghanistan. Yet, the Biden regime not only says they can't guarantee the safety of our fellow citizens, they're lying about the conditions in the Taliban-controlled nation.

This is NOT a partisan issue. So, if you can, please go the "extra mile" and choose LEVEL TWO faxes to reach EVERY member of the United States Senate. Go here to instantly send 100 personalized faxes to Capitol Hill for just $50.

P.S. The chaos in Afghanistan is a direct result of Joe Biden's horrible foreign-policy decisions and strategy. In his book Memoirs of a Secretary at War, former Defense Secretary Robert Gates wrote that he thinks Mr. Biden "has been wrong on nearly every major foreign policy and national security issue over the past four decades." American citizens trapped inside a nation controlled by Taliban terrorists should NOT have to pay the price for the "Commander-in-Chief's" mistakes. Go here to fax Senators now:

As US military sticks to airport, British and French forces are rescuing their citizens in Kabul: reports (Army Times)