Biden SPENDING SCAM getting worse by the day! 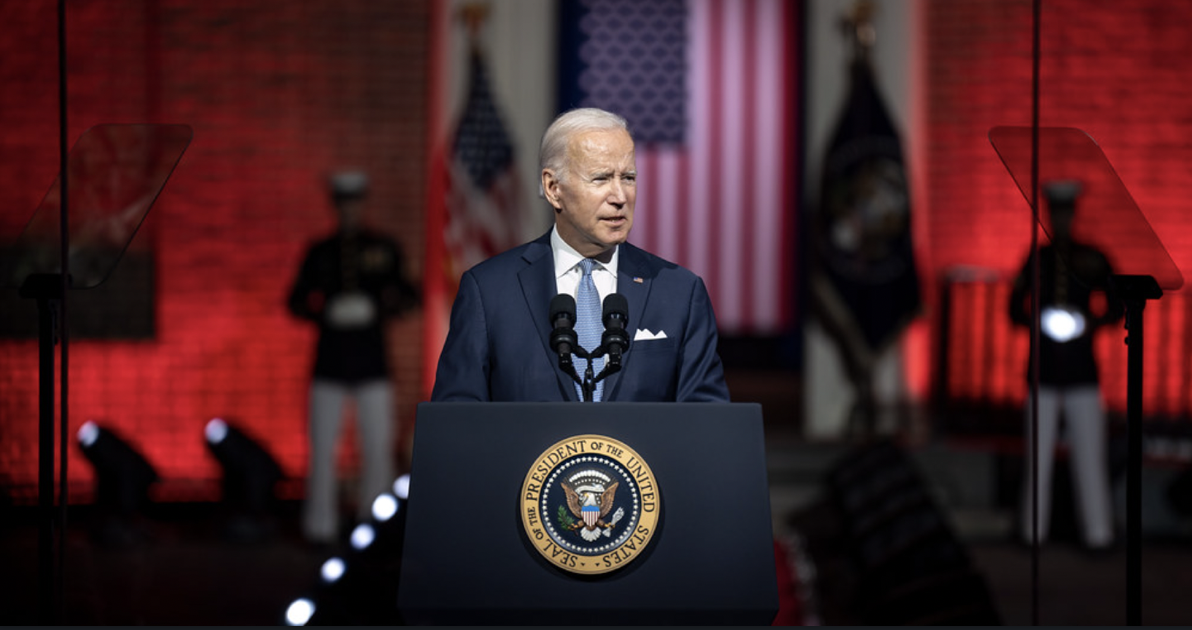 The backroom, dirty-deal SPENDING SCAM is getting worse by the day! Now, Democrats and Uni-Party RINOs (Republicans in Name Only) want to add "election reform" to their "emergency" spending bill. Not only does The Swamp want to finance the Biden Regime's "America Last" agenda for nine more months, they also want to rig future elections!

This is a "lame duck" session of Congress. Republicans take control of the House on January 3, 2023. Senate GOP "leaders" know that. Those Representatives should have the right to set America's spending priorities right away. They shouldn't have to wait until the end of the fiscal year (September 30, 2023) to fix the two years of damage done by Joe Biden's "presidency."

What's worse is that the Uni-Party plans to pass a week-long continuing resolution (CR) THIS WEEK before they can pass their horrible nine-month spending bill NEXT WEEK! If Congress can pass a week-long CR to avert a government shutdown tomorrow, why isn't the GOP pushing for a month-long "omnibus" bill instead? Why not fund the government ONLY until Republicans take control of the House in three weeks? Click here to fax Senators now! 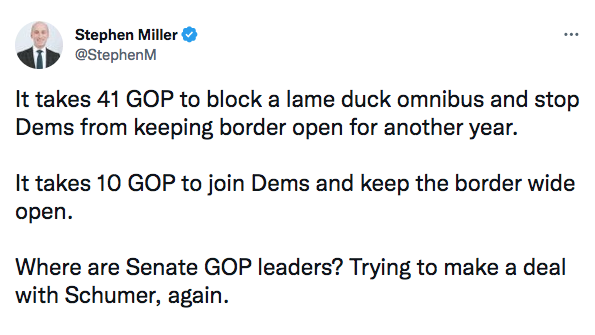 Yesterday, we told you how President Trump's former senior advisor Steven Miller publicly questioned GOP "leaders" loyalty and motives earlier this week. In that same Twitter post, he also outlined what it will take to BLOCK or PASS the Biden Regime's latest SPENDING SCAM:

It takes 41 GOP to block a lame duck omnibus and stop Dems from keeping border open for another year.

It takes 10 GOP to join Dems and keep the border wide open.

Click here or on the banner below to send your "Stop The Spending Scam!" faxes to key Senators now. Fight back against the Democrats' and Uni-Party RINOs' "America Last" agenda now:

Because your action is so critical, we're empowering team members to instantly reach NINE Senate RINOs -- who voted with Democrats earlier this month on the horribly misnamed "Respect For Marriage Act" -- and "moderate," swing-vote Sen. Joe Manchin (D-WV) for only $10. RINOs are so afraid of FAKE NEWS and Woke Mob that they refuse to stand up to the Biden Regime and stop ANOTHER massive SPENDING SCAM.

Again, instantly fax up to 10 key Senators for only $10. Our LEVEL TWO "Stop The Spending Scam!" faxes enable you to send your personalized message to an additional 39 GOP Senators for just $30 (up to 41 total faxes). Or utilize LEVEL THREE of this exclusive FaxFire to reach EVERY Senator with a working fax number (up to 85 total) for $50. Click here to fax Senate offices on Capitol Hill now. Thanks, in advance, for taking action this morning.

P.S. The Democrats' and RINOs' plan is to pass a stopgap spending bill THIS WEEK to fund the government through December 23. That will buy time for this "lame duck" Congress to finalize a dirty, backroom deal to fund Joe Biden's "America Last" agenda through the rest of the fiscal year -- until October 1, 2023. Then, as the Uni-Party "elite" run out of D.C. for Christmas on December 22, they'll all grin and pat themselves on the back for sticking it to taxpayers AGAIN! Want to throw a "wrench" into their "Hate America" plan? Go here: