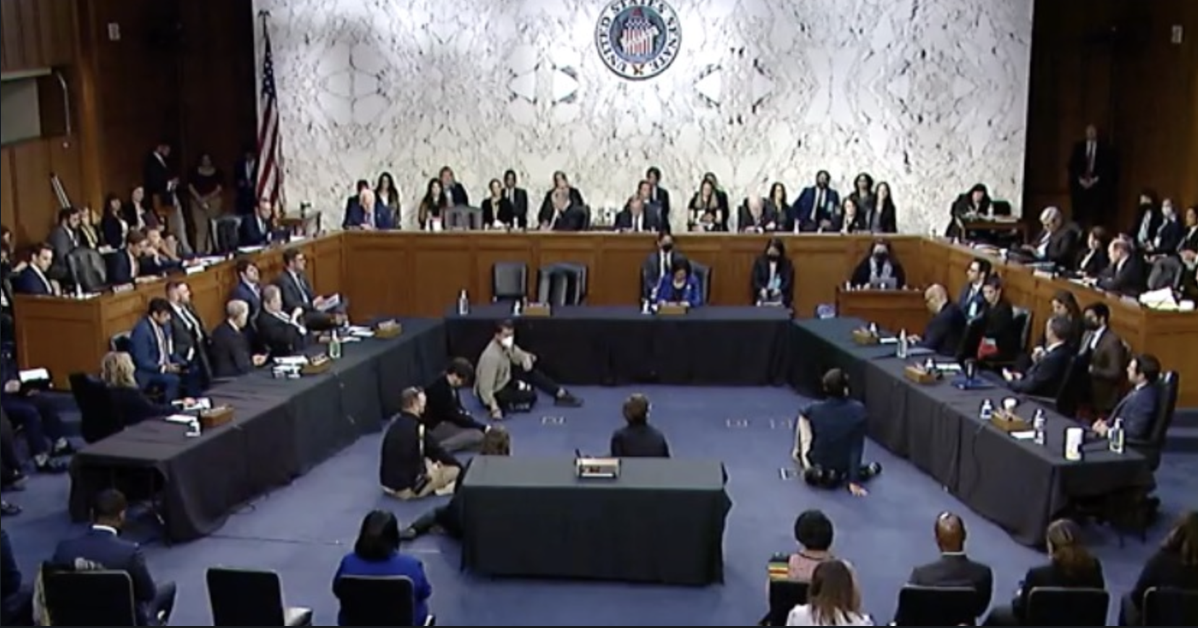 In a strict party-line vote this afternoon, the Senate Judiciary Committee deadlocked on Judge Ketanji Brown Jackson's nomination to the Supreme Court of the United States (SCOTUS). The 11-11 tally is expected to result in Senate Majority Leader Chuck Schumer (D-NY) calling for a floor vote later today to "discharge" Joe Biden's pick from the Judiciary Committee. FOX News reports:

This means the chamber would be able to advance through the cloture process throughout the week, setting up a likely Thursday or Friday final confirmation vote barring anything unforeseen.

It also means Sens. Lisa Murkowski, R-Alaska, and Mitt Romney, R-Utah, who haven't yet announced whether they will vote for Jackson, will be forced on the record in short order. Their support would be a major win for the White House, which is seeking bipartisan backing for Jackson.

Sen. Susan Collins, R-Maine, is the only Republican to announce she will vote for Jackson so far.

Democrats need only a simple majority to "discharge" Jackson's nomination to the full Senate. With Collins' support or a tie-breaking vote from Kamala Harris as "President of the Senate," a final confirmation vote could be less than 72 hours away!

Jackson has come under fire for her weak sentencing of child predators, her inability (or unwillingness) to define what a "woman" is, her refusal to condemn Democrat efforts to "pack" the High Court, and her apparent support for divisive Critical Race Theory. You can utilize Grassfire's unique FaxFire system to tell GOP Senators EXACTLY where you stand!

If you want Senate Republicans to vote AGAINST Judge Jackson's Supreme Court nomination, take immediate action! Click here or on the banner below to instantly send your "Vote 'No!' On Biden's SCOTUS Pick!" faxes to Capitol Hill:

With another crucial vote expected TODAY, "America First" patriots must make their voices heard! Democrats may be willing to overlook Jackson's controversial court rulings, criminal sentencing and apparent support for Critical Race Theory by voting in favor of her lifetime appointment to the Supreme Court. But what about Republicans? Click here to fax Senators now.

For only $30, you can instantly send your personalized "Vote 'No!' On Biden's SCOTUS Pick!" faxes to EVERY Republican Senator and two moderate Democrats (52 faxes). If you can, go the "extra mile" to reach all 100 U.S. Senators for only $50. To maximize the impact of this FaxFire, we're offering team-member discounts of up to 50% off!

Click here to fax Senators now if you want them to oppose Mr. Biden's nominee. Republican Senators must stand strong and stay united if they want to stop Judge Jackson's confirmation. To send your own faxes, click here for a list of Senate FaxFire targets and their contact information. Thanks, in advance, for taking action tonight.

Judiciary panel deadlocks on Jackson SCOTUS nomination, setting up Senate vote to move it out of committee (FOX News)