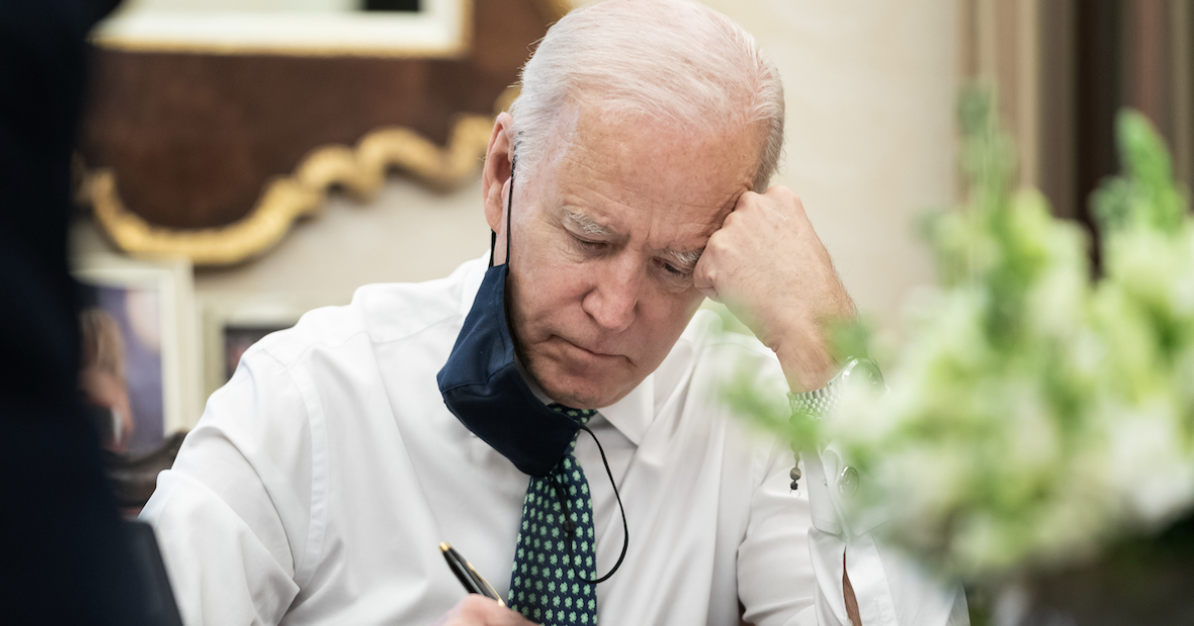 In his first official address to Congress (actually... to less than half of Congress), Joe Biden made it clear that the so-called Equality Act is STILL a signature piece of his radical, socialist, far-left agenda. While the anti-faith, pro-LGBTQ legislation wasn't a focal point of Wednesday night's speech, his comments about it were outrageous:

"I also hope Congress will get to my desk the Equality Act to protect LGBTQ Americans. To all transgender Americans watching at home, especially young people who are so brave, I want you to know your president has your back."

To hear Mr. Biden specifically target transgender "young people who are so brave" was shocking for many Americans. Apparently, radical Democrats and the Unhinged Left have no age limit for their indoctrination efforts. But Jesus said in Matthew 18:6, "If anyone causes one of these little ones -- those who believe in me -- to stumble, it would be better for them to have a large millstone hung around their neck and to be drowned in the depths of the sea" (NIV).

"Young people" can't drive until they're 16 years old; can't vote or join the U.S. military until they're 18; and can't drink or smoke until they're 21. But many radical Democrats, the Unhinged Left and the "woke mob" want CHILDREN to receive gender therapy and sexual-reassignment surgery in the name of progressivism. These kind of liberal "values" are capable of destroying American families and, with them, the United States itself.

Joe Biden promised to sign a pro-homosexual, pro-transgender bill into law during his "First 100 Days" in office, but he failed. Senate Majority Leader Chuck Schumer (D-NY) still doesn't have the 60 votes needed to pass H.R.5.

That's good news to pro-faith Americans, because the misnamed Equality Act is, likely, the biggest threat to religious liberty this nation has ever seen. H.R.5 insists that Christians and other people of faith support a radical, pro-LGBTQ agenda or face severe personal and financial implications. The bill even invalidates a 1993 law meant to protect EVERY Americans' sincerely held religious beliefs.

Democrats need 10 Republicans to "break ranks" and vote "Yes" for the legislation to become the law of the land. You can tell GOP Senators to stand firm and stay united so this anti-faith, pro-LGBTQ bill won't make it to Joe Biden's desk. If you oppose the anti-faith, anti-woman, anti-child and anti-science H.R.5, take action to embolden lawmakers now!

If passed, H.R. 5 will impact churches, faith-based businesses, religious organizations (including adoption and foster-care providers) and Christian schools, colleges and universities. It will harm women and girls by erasing significant safety, privacy and equality rights; defend abortion under the guise of "sex discrimination"; and force medical professionals to choose between breaking the law and violating their faith.

P.S. Millions of Americans want to see this radical and extreme bill defeated in the Senate. H.R.5 boldly and unapologetically sacrifices religious liberty on the "altar" of political correctness. But YOU have the power to demand Senate Republicans take action to stop it! Click here to instantly send your "Stop The 'Equality' Act!" faxes to 50 GOP Senators and Sen. Manchin now for only $30, or reach all 100 U.S. Senators for only $50: