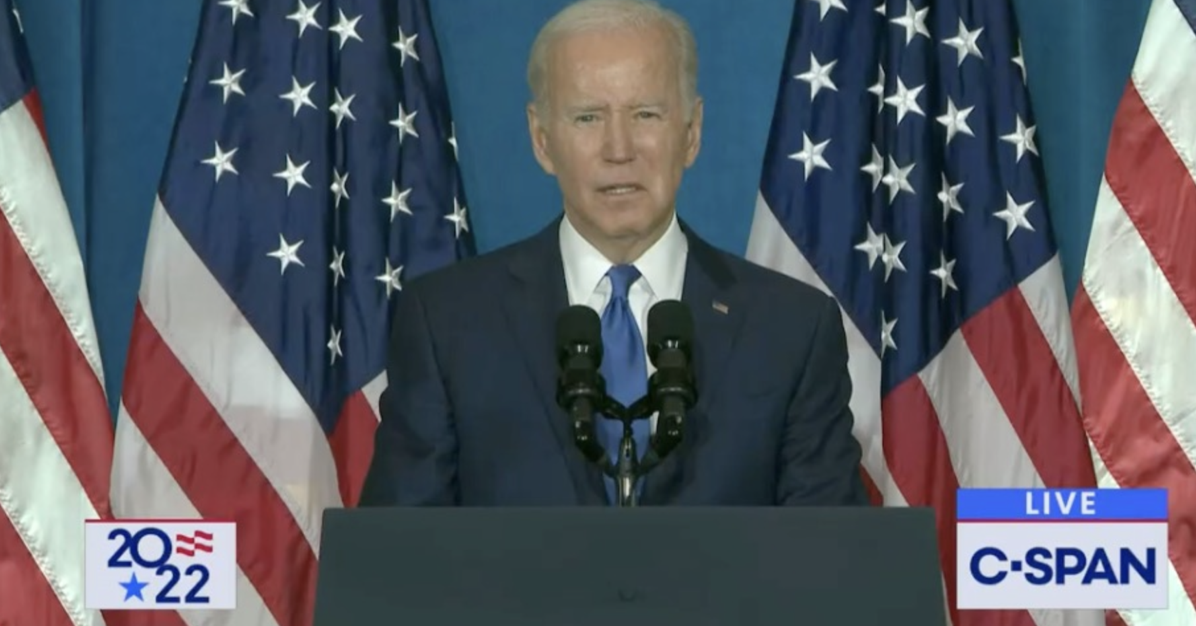 Joe Biden and his fellow radical, unhinged Democrats are spewing more hysterical, anti-MAGA rhetoric, as America sprints into next week's midterm elections. With a devastating "red wave" looming -- one that's expected to give Republicans control of the House AND Senate -- the so-called "Commander-in-Chief" went on the attack again last night. During his second highly divisive, prime-time, anti-MAGA speech in two months, Mr. Biden said:

"Extreme MAGA Republicans aim to question not only the legitimacy of past elections but elections being held now and into the future. The extreme MAGA element of the Republican party... is trying to succeed where they failed in 2020 -- to suppress the right of voters and subvert the electoral system itself."

The midterms haven't even happened yet, and Joe Biden's already trying to run "interference" for any voter fraud or election irregularities. Also, the "Divider-in-Chief" demanded voters accept that several races (most likely, the closest ones affecting the balance of power in the House and Senate) won't be decided on Election Day:

Actually, that's NOT how this is supposed to work. The United States holds Election DAY -- not Election Week or Election Month. Votes need to be counted on Election DAY! We're not some third-world country. Many other nations with millions of citizens (Brazil, France, Italy) manage to vote and announce the results of most races within one day.

Also, Joe Biden said if you're unhappy with the outcome of an election, have questions about the results or want to know how that outcome was achieved, he thinks you're, basically, an enemy of the state. If the "red wave" doesn't come crashing down on Democrats, like so many in politics and the media expect, Mr. Biden warned the American people yesterday to NOT question it.

Grassfire has re-launched our "Joe Must Go!" national petition to empower our team members to demand Republicans in Congress take action to stop Joe Biden's un-American and un-presidential attacks against the GOP. You can call on House and Senate leaders to take action against the "Commander-in-Chief's" MAGA hate.

If you think it's time for Republican lawmakers to pressure Joe Biden to end his failed "presidency," we're empowering you to take action now. Sign the "Joe Must Go!" national petition to tell GOP leaders to demand Mr. Biden's immediate resignation, removal or impeachment. Click here or on the banner below to make your voice heard. Add your name now:

To "save democracy," Mr. Biden continues trying to vilify, ostracize, cancel and intimidate anyone and everyone who he considers a "mainstream Republican." (We call them them "RINOs": Republicans In Name Only.) As Grassfire has stated before, nothing says "We're saving Democracy" like the Biden regime's third-world, banana-republic tactics of politicizing and weaponizing federal law enforcement against its political enemies: MAGA Republicans and Donald Trump.

That's why Grassfire is empowering "America First" patriots to take action, right now, to stop these outrageous, verbal assaults from Joe Biden. If you think it's time for Republicans to pressure Mr. Biden to step down, go here to add your name with just a few clicks.

Again, the Biden Regime is trying to intimidate and silence MAGA voters less than one week before the midterm elections. Don't let Joe Biden attack millions of patriotic Americans without pushing back on his ridiculous, un-American and un-presidential rhetoric. When the "Joe Must Go!" national petition reaches 20,000 signatures, Grassfire representatives will deliver your petition to GOP leaders on Capitol Hill. Thanks, in advance, for making your voice heard tonight.

P.S. If you want to tell House and Senate Republicans to remove Joe Biden from office because he isn't up to the challenge of being America's Commander-in-Chief, demand they take immediate action. Go here to sign the "Joe Must Go!" national petition now: