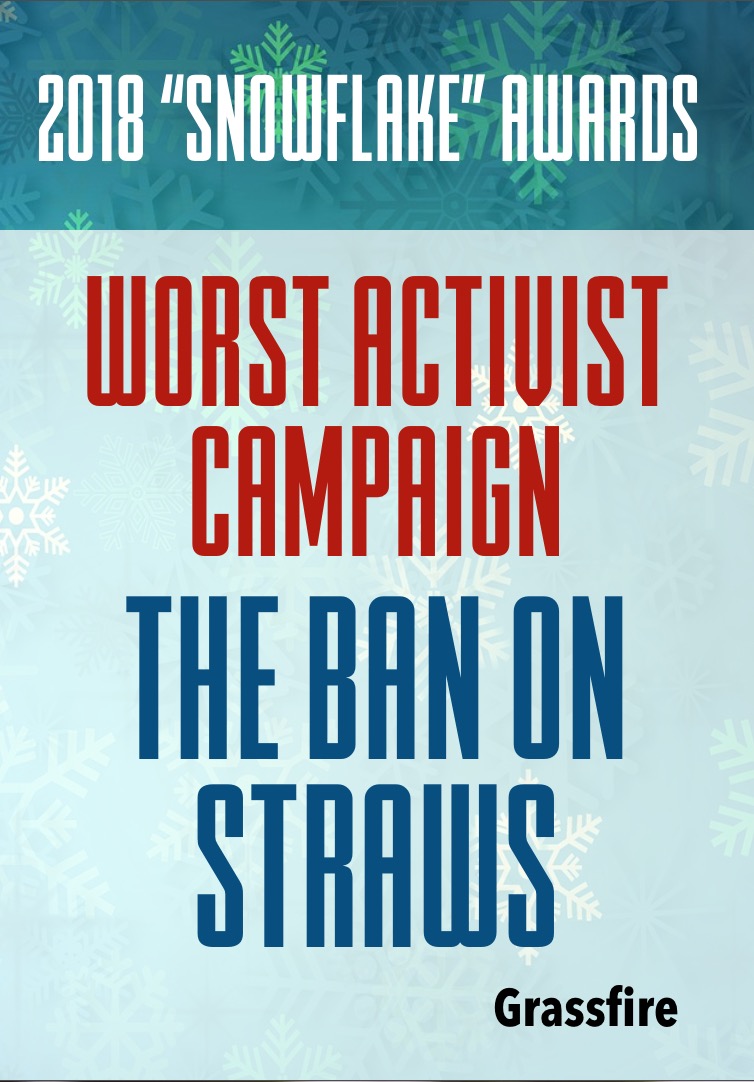 The Winner of the 2018 "Snowflake" for "Worst Activism Campaign" goes to...

The Ban On Straws!

There really wasn't much competition in this category, because the Ban On Straws could be an all-time worst Snowflake award winner, and here's why...

For starters, straws don't actually kill fish or other sea life -- certainly not in any real numbers. This craze started when an enviro video of a sea turtle with a straw stuck up its nose went viral. 33 million views later and we had a campaign. Yes, it's sad to see the poor turtle with a straw stuck up its nose. But straws represent such an infinitesimal portion of the overall plastic production and correspondingly plastic ocean pollution, that this turtle had a better chance of being hit with a fiery comet than having a fatal outcome as the result of a straw being stuck up its nose (which was not fatal although i'm sure a bit annoying to the turtle).

But the campaign really got going based on some 9-year-old research. By that we mean faulty research from a 9-year-old kid who reported that 500 million straws are thrown away every day in America. That's about two straws per person. Of course, the NYTimes and others didn't bother to fact check.

And the Snowflakes were off and running. By summer, Starbucks announced an "environmental milestone" and would ban straws by 2020, replacing the straws with sippy cup lids. Never mind that those lids probably require MORE plastic than the straws! Others were working on paper straws (not so brilliant). And cities started banning straws.

Except for the facts.

3. Straws aren't a global menace as announced by a 9 year old and reported by the NYTimes

So the winner of the 2018 "Snowflake" in the category of "Worse Activism Campaign" is... the Ban On Straws!