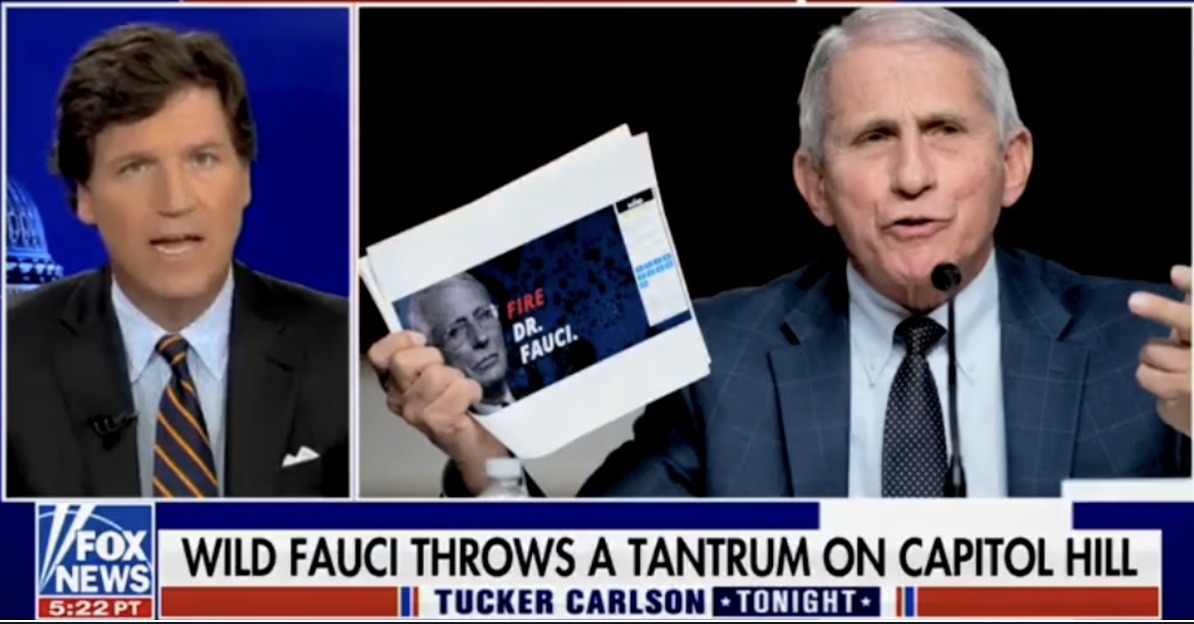 On FOX News last night, Tucker Carlson attacked Dr. Anthony Fauci, director for the National Institute of Allergy and Infectious Diseases (NIAID), for his testimony before Congress yesterday. The highest paid federal employee in the United States of America faced intense criticism (again) from Sen. Rand Paul (R-KY) for his handling of the coronavirus pandemic.

After referring to Fauci as "even more loathsome and complicit even than his toughest critics ever alleged," Carlson broke down the two men's testy exchange about Fauci's reported efforts to downplay the lab-origin theory of COVID-19. After playing a short video clip from the Senate hearing, Carlson ripped Fauci:

"He's such a filthy, little demagogue. Filthy. Little. Demagogue. Doesn't answer the question, makes it all about him. ... And then, he whips around and accuses Rand Paul of endangering his life. Fauci held up a page from Rand Paul's website that read, 'Fire Tony Fauci.' Now, Fauci is the highest paid federal employee and one of the longest serving. He works for us! So we have a right not to want him to work for us anymore. That's called democracy. But according to Fauci that's illegitimate."

Carlson even criticized Fauci for making excuses and for trying to defend himself over his handling of the crisis: "Fauci refused to take any responsibility for the lockdowns that he supported that wrecked the country in a lot of ways." The showdown with Sen. Paul exposed more of Fauci's failures, and Carlson made sure his audience saw it.

If you agree that it's time to "Fire Fauci!", Grassfire wants to empower you to make your voice heard. You can take immediate action to demand Republicans in the House and Senate call for the NIAID director's immediate termination or resignation!

Click here or on the banner below to join thousands of other patriotic Americans calling on Congress to fire Dr. Anthony Fauci or -- at the very least -- demand his immediate resignation:

Thousands of grassroots conservatives have already added their names to this important national petition. Sign now, and Grassfire will represent you when we deliver "Fire Fauci!" petitions to Republican leaders on Capitol Hill.

But in order to schedule that petition delivery, we must reach 20,000 signatures. Any number less than that simply won't have the desired impact. So click here to make your voice heard! Thanks, in advance, for taking action today.

P.S. Reports indicate that Dr. Anthony Fauci may have lied about "gain of function" research at a Chinese lab that likely unleashed COVID-19 on the world. He's flip-flopped on mask effectiveness, called for vaccine mandates, and advocated for devastating, economic lockdowns -- just to name a few of his pandemic failures. If you want to hold him accountable, click here or on the banner below to sign the national petition to "Fire Fauci!":