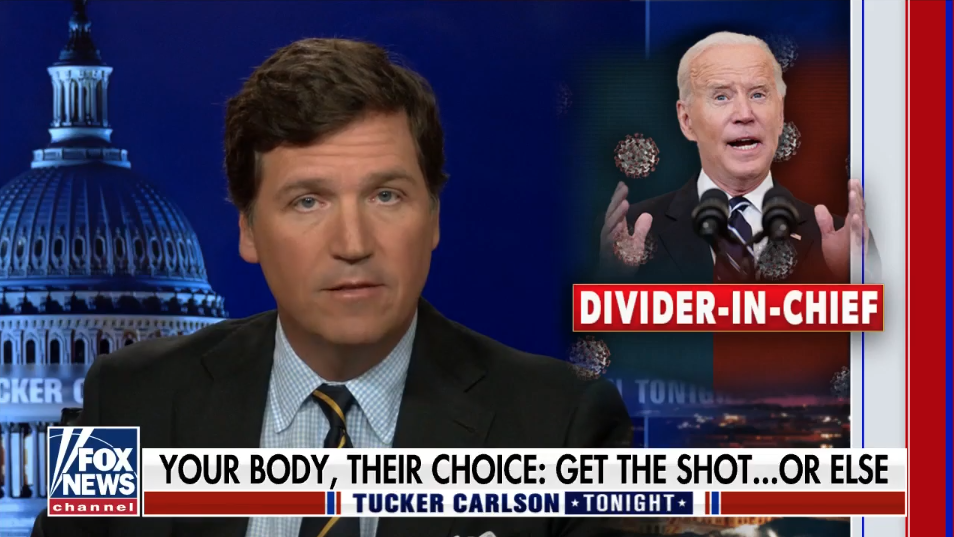 Behind a banner that read "Your Body, Their Choice: Get The Shot...Or Else", Tucker Carlson spent the first 16 minutes of his #1-rated cable news program BLASTING Joe Biden's "absurd" and "irrational" coronavirus jab mandate. Here's an excerpt from Monday night's opening monologue:

"It's a mixed picture of some of what we know about the COVID vaccines. And yet, these very same vaccines, which are far less effective than we were told they were initially, which are potentially dangerous for some and completely unnecessary for tens of millions of others, are now nevertheless mandatory for virtually everyone in America. So why is that? Why exactly is that the policy? In his speech to the country last week, Joe Biden didn't bother to explain why. Explanations are not necessary at this point. Your consent is no longer required."

Tucker went on to say that the real crisis at hand is the "degradation" of the American people by the Biden regime. He ended the segment by saying we're being steamrolled by our so-called "leaders," who continue to insist: "Bow to our will, or we'll punish you. Violate your own beliefs. Give us your dignity."

Joe Biden and the radical, unhinged Left have doubled down on their COVID tyranny. If you agree and want to see Congress put a stop to it, take immediate action utilizing Grassfire's unique FaxFire tool.

Instantly send personalized "NO MASKS! NO MANDATES! NO SHUTDOWNS!" faxes to your Representative, your two Senators and key GOP members of the House and Senate. Click here or on the banner below to reach up to 20 lawmakers for only $20:

Tucker Carlson had a lot more to say about the COVID vaccine mandate on Monday night's program. See last night's update below to find out what he thinks is the real motivation behind "the most divisive speech ever given by a modern American president." Or click to take immediate action against Joe Biden's forced vaccination of America. Thanks, in advance, for making your voice heard today.

P.S. We want to let our team members know that Grassfire is NOT against people choosing to receive the COVID vaccine. We do not think "the jab" should be mandated, required or forced on Americans for work, school, military service or any other reason. If you agree, go here to fax up to 20 members of Congress with just a few clicks:

Tucker Carlson is the number-one voice in cable news, and he doesn't shy away from a fight or speaking truth to power. Last night, the FOX News host took on Joe Biden's unconstitutional COVID vaccine mandate, which the "Divider-in-Chief" unveiled during a White House speech this past Thursday. During his opening monologue, Carlson said:

"Biden's address was the most divisive speech ever given by a modern American president. Virtually every sentence of the speech reinforced a single point, again and again. And it was this: Your fellow Americans are dangerous to you. They could kill you. … Only the Biden administration can save you: 'We're going to protect vaccinated workers from unvaccinated workers.'"

Tucker went on to call the rationale behind the Biden regime's vaccine mandate "transparently absurd," adding: "It's about power. These demands are so obviously irrational that forcing you to accept them without complaint is the whole point of the exercise. … If they can make you take medicine you don’t want or need, they’ve won. You are theirs. You belong to them."

Grassfire agrees, which is why we're empowering our team members to push back against this practical and existential threat to liberty. Joe Biden's "absurd" and "irrational" jab mandate demands your attention. It demands your resistance, while you also keep your eyes fixed on the Afghan Treason, the SPENDING SCAM, the flailing economy and the Democrats' other attacks on our constitutional liberties.

Fight the Biden regime's COVID tyranny! Click here or on the banner below now to send your personalized "NO MASKS! NO MANDATES! NO SHUTDOWNS!" faxes to your Representative, your two Senators and key GOP members of the House and Senate. Reach up to 20 lawmakers for only $20:

ATTENTION GRASSFIRE VIPS: GO HERE TO SEND YOUR "NO MASKS! NO MANDATES! NO SHUTDOWNS!" FAXES FOR 80% OFF! Not a VIP? Go here to send this fax at an 80% discount. (Trouble accessing your benefits? Go here.)

The Biden regime and the Unhinged Left have launched the FORCED VACCINATION of America. They're also MANDATING facemasks again and threatening to reimpose freedom-restricting, economy-destroying SHUTDOWNS and LOCKDOWNS.

Are you going to let them take our great nation down the "rabbit hole" of using the FEARdemic to, once again, strip you of your God-given, constitutional rights? If you're outraged by these attacks on your freedom, take immediate action by instantly sending your "No Masks! No Mandates! No Shutdowns!" national faxes now with just a few clicks!

If you REJECT the radical Democrats' efforts to "reset" America into a "woke," socialist, totalitarian state, Grassfire is empowering you to do something about it! We're fighting for your right to make your voice heard in the battle against COVID tyranny.

If you can, please go the "extra mile" and choose LEVEL TWO faxes to reach the ENTIRE House Freedom Caucus for only $45 (up to 65 faxes). Our LEVEL THREE faxes will expand your impact to include EVERY Republican in the United States Senate. That's up to 105 faxes in all. Go here to make your voice heard now.

Say NO to Joe Biden's unconstitutional jab mandate! Say NO to re-masking of the American people -- especially children! Say NO to more shutdowns and totalitarian edicts! To send your own faxes, click here for a list of FaxFire targets and their contact information. Thanks, in advance, for taking action today.

P.S. Please note that Grassfire is not against people choosing to receive the COVID vaccine, especially the elderly and those most at risk. But we do NOT think the jab" should be mandated or forced on Americans for work, school, military service or any other reason. Click here or on the banner below if you agree and want to take action: