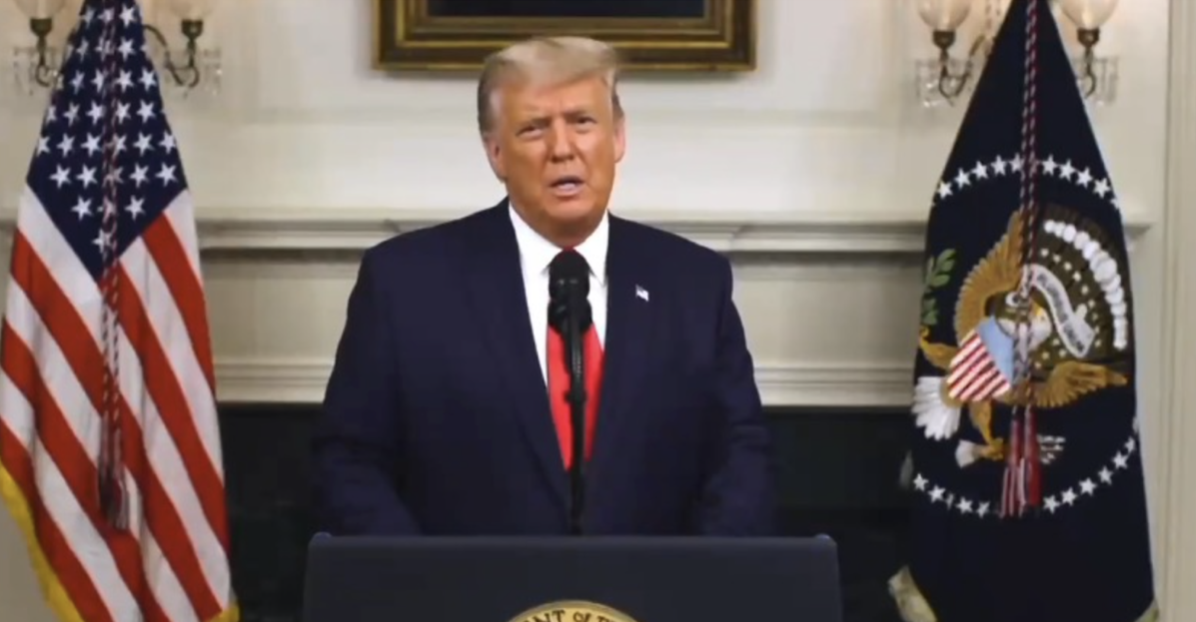 Despite calls to concede from radical Democrats, the Unhinged Left, Anti-Trump RINOs, Hollywood "elite" and the FAKE NEWS media, President Trump just doubled down on his promise to expose any and all voter fraud and election interference. In an amazing 46-minute speech yesterday, America's Commander-in-Chief said his closest advisors are telling him:

"The single greatest achievement in your presidency will be exactly what you're doing right now: [fighting for] voter integrity for our nation. It's more important than any (other accomplishment)."

The President warned yesterday, "If we don't root out the fraud -- the tremendous and horrible fraud that's taken place in our 2020 election, we don't have a country anymore. So with the resolve and support of the American people, we will restore honesty and integrity to our elections, and we will restore trust in our system of government."

Grassroots patriots MUST keep fighting to urge GOP leaders to support our Commander-in-Chief and his legal team. Utilize Grassfire's "Stop The Steal!" FaxFire to demand House and Senate Republicans, along with other key lawmakers, expose any and all voter fraud in the 2020 election.

Yesterday, we updated our targets to include governors from the battleground states of Arizona, Georgia, Michigan, Nevada, Pennsylvania, Virginia and Wisconsin -- AT NO EXTRA CHARGE! So click here or on the banner below now to fax your personalized message to all 53 GOP Senators, 16 lawmakers in GA, PA, MI and WI, along with SEVEN governors in key battleground states for just $30:

Go the "extra mile" by choosing LEVEL TWO of the "Stop The Steal!" FaxFire and also reach House Minority Leader Kevin McCarthy (R-CA), Minority Whip Steve Scalise (R-LA) and ALL 37 members of the House Freedom Caucus for just $20 more. Click here to send 115 faxes to lawmakers for only $50. That's less than $.44 each.

Democrats, Big Tech and FAKE NEWS don't decide who the president will be. We, the People choose our Commander-in-Chief! That's why grassroots patriots, like you, MUST keep fighting to "Stop The Steal"

In our next ELECTION UPDATE, Grassfire will share some of the "shocking irregularities, abuses, and fraud" that Mr. Trump revealed yesterday. So much evidence exists that it’s simply too much to fit in a single email.

This is a battle the President needs your help to win! So click here to fax 76 lawmakers now for less than $.40 each! Thanks, in advance, for taking action today.

P.S. If you missed our previous "Stop The Steal! update, please see below to find out why President Trump called yesterday's 46-minute statement "the most important speech I've ever made." If you did read last night's post and want to take immediate action to support our Commander-in-Chief, click here or on the banner below now to schedule your "Stop The Steal!" faxes for instant delivery at HISTORIC Grassfire discounts:

Late this afternoon, President Trump took his case against voter fraud and election interference directly to the American people. The Commander-in-Chief started his 46-minute statement by saying, "This may be the most important speech I’ve ever made." (Click here to watch the video.)

The President provided extensive details and important context about his campaign's "ongoing efforts to expose the tremendous voter fraud and irregularities" in the 2020 election. While calling Americans' right to vote "our greatest privilege," Mr. Trump said that "bad things" have happened in the days and weeks following November 4:

"As president, I have no higher duty than to defend the laws and the constitution of the United States. That is why I am determined to protect our election system, which is now under coordinated assault and siege.

"For months leading up to the presidential election, we were warned that we should not declare a premature victory. We were told repeatedly that it would take weeks, if not months, to determine the winner, to count the absentee ballots, and to verify the results.

"My opponent was told to stay away from the election: 'Don’t campaign. We don’t need you. We've got it. This election is done.' In fact, they were acting like they already knew what the outcome was going to be. They had it covered, and perhaps they did — very sadly for our country. It was all very, very strange."

President Trump said "the constitutional process must be allowed to continue... to defend the honesty of the vote." He also insisted that this effort is about more than protecting the votes of his 74 million supporters: "It's about ensuring that Americans can have faith in this election and in all future elections."

A recent poll by Politico found that 79% of Trump voters think the 2020 election was stolen through illegal voting and fraud. If you agree, Grassfire invites you to take immediate action to "Stop The Steal!"

Today, we updated our "Stop The Steal!" FaxFire -- at no extra cost -- by adding the governors of SEVEN states at the center of this fight: Arizona, Georgia, Michigan, Nevada, Pennsylvania, Virginia and Wisconsin. Grassfire's unique FaxFire system also targets an additional 16 lawmakers in four of those battleground states (Georgia, Michigan, Pennsylvania and Wisconsin), as well as ALL 53 Republicans in the United States Senate!

+ + Stand With The President To "Stop The Steal!" Fax Lawmakers Now!

Again, your LEVEL ONE "Stop The Steal!" faxes today will target seven key governors, 16 lawmakers in four battleground states and EVERY Republican in the U.S. Senate. For just $30, you can instantly send 76 personalized faxes in support of President Trump! This special, emergency FaxFire is more than 60% off our regular price!

Go the extra mile by choosing LEVEL TWO for only $50, and you'll also reach House Minority Leader Kevin McCarthy (R-CA), Minority Whip Steve Scalise (R-LA) and ALL 37 members of the House Freedom Caucus. That's 115 faxes in all -- at a discount of more than 56%!

Even if you've faxed before, please consider taking additional action to reach the seven governors we added today. Click here or on the banner below now to send your personalized message to lawmakers for as low as $.40 per fax:

Grassroots patriots MUST keep fighting to urge GOP leaders to support Mr. Trump and his legal team. Take action now to demand House and Senate Republicans expose any and all voter fraud. Click here to see a complete list of FaxFire targets and their contact info. Thank you, in advance, for standing with America's Commander-in-Chief today.

P.S. The COVID-inspired, vote-by-mail scams that Democrats insisted on months ago have brought America to where it is now -- on the brink of a stolen election! The Republican-controlled Senate, GOP leaders in the House, these 16 state legislators, and seven governors MUST take immediate action! Liberty-loving Americans can't let the radical, unhinged Left get away with robbing Donald Trump of his second term! Click here or on the banner below now to fax your personalized message to seven key governors, 16 battleground-state legislators AND all 53 GOP Senators for just $30:

BREAKING: "The most important speech I've ever made" –Trump
Trump: "Tremendous and horrible fraud (has) taken place"
Read the blog at Grassfire