It's time to target Christian schools!

The lesson wasn't that journalists shouldn't jump to conclusions, or pre-judge a situation, or wrongly stereotype a teenager because he is wearing a "Make America Great Again" hat. No. The lesson the New York Times learned is that we must double down in our attacks on Christian schools.

NYT "reporter" (in actuality, an "opposition researcher") Dan Levin was put on assignment on a story to "expose Christian schools." So he sent out this tweet:

I'm a New York Times reporter writing about #exposechristianschools. Are you in your 20s or younger who went to a Christian school? I'd like to hear about your experience and its impact on your life. Please DM me.

It was bad enough that even many allegedly conservative commentators misjudged the Covington situation -- like Ben Shapiro, National Review, Scott Adams, and others. Most on the right recanted. But the Left became unglued.  A CNN reporter called the young men "asswipes." Another wanted the boys to be "punched in the face." They wanted the boys expelled. And one Hollywood elitist, Jack Morrissey, said the boys should be sent "into the woodchipper."

And now, the New York Times has dispatched a reporter to expose the scandal of Christian schools.

This is the nature of the cultural battle we are engaged in right now. Even when the Left is exposed to be blatantly wrong, they double down and attack. If you wear a MAGA hat, or believe in border security, or send your kids to private schools, or carry a gun, you are a bigot, a racist, and you must be exposed and silenced.

And this is why Grassfire will continue to fight!

I believe the Grassfire citizen network is one of the strongest and most active on the "cutting edge" issues impacting our nation. A decade ago, we were criticized by many in the conservative community for drawing attention to the "illegal invasion" with giant billboards and national TV ads. We were among the first to call out the Obama regime and expose the truly radical nature of what was happening inside that Administration. We fought the deceptive way ObamaCare was passed, and we called out the RINO Republicans who ran from the fight.

And this month, Grassfire team members are leading the charge again! Look at what you've done...

This month, Grassfire team members have mounted a massive PUSH BACK against the Left's bullying tactics regarding border security. In all, hundreds of thousands have connected with Grassfire resources on this issue. Tens of thousands have directly engaged and expressed their support for the Border Wall. And this weekend, you are bombarding with faxes the offices of the "New RINOs" who voted with Democrats in the Senate on the latest effort to end the shutdown.

Grassfire is engaged in these battles. Few organizations in the country can inform and equip tens if not hundreds of thousands of citizens. But WE NEED YOUR HELP!

I want to EXPAND our efforts. I want to DOUBLE our impact on this critical issue in the coming weeks. But we rely on the generosity of friends like you!

Will you stand with me as Grassfire builds a "wall" of support for liberty and limited government and against the attacks of the emboldened Left that is doubing down in its attacks against us -- even targeting Christian schools? Go here to help now:

Here at Grassfire, we're doing everything in our power to put more tools in your hands and expand your voice. We've taken massive risks to re-do Grassfire. We 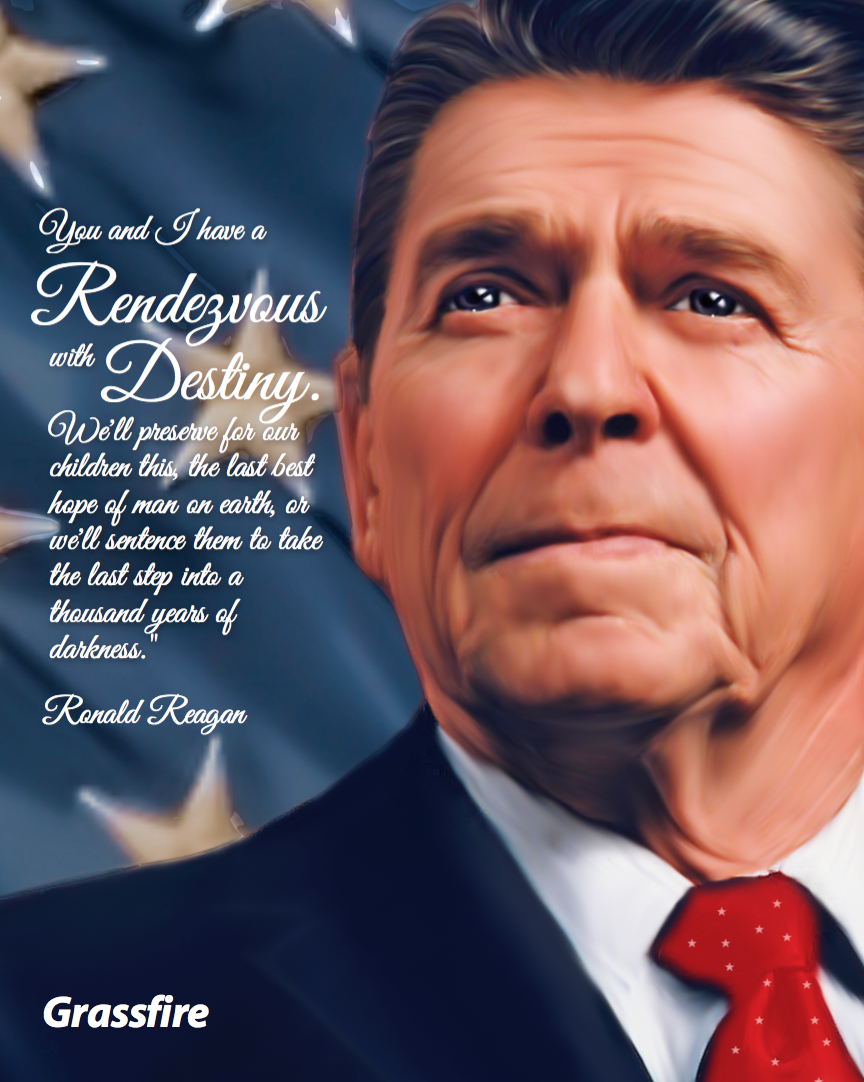 have risked it all because we believe this is the most critical time in our lifetimes to stand for liberty. But we must stand together!

If you can help with a contribution of any amount today, we'll send you an exclusive Grassfire print featuring President Reagan and his stirring "Rendezvous With Destiny" quote. This print is only available through Grassfire and is suitable for framing.

Go here to request your Reagan print when helping Grassfire.

Thanks in advance for your help!