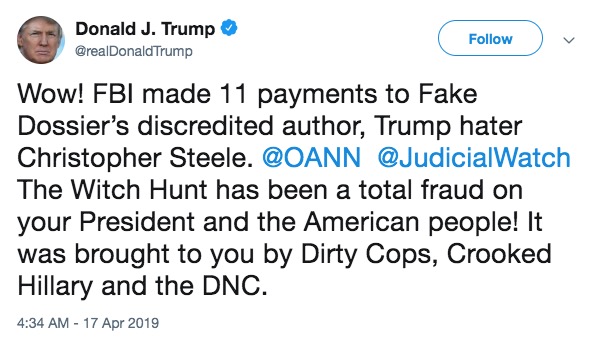 Judicial Watch is now suing for the records surrounding the at least 11 payments that were made by the FBI to Christopher Steele. Steele was the author of the bogus anti-Trump dossier that was funded by the Clinton Campaign and the DNC and was the primary basis for the two-year-long witch hunt against President Trump. President Trump tweeted that this is more evidence that the "Witch Hunt has been a total fraud... brought to you by Dirty Cops, Crooked Hillary and the DNC."

Judicial Watch's president said, "How and why did the FBI pay Christopher Steele, who was already being funded by the Clinton campaign and DNC through Fusion GPS?"

If you agree it's time to INVESTIGATE THE INVESTIGATORS, click here: