Sen. Graham on Biden SCOTUS nominee: "Activist to the core" 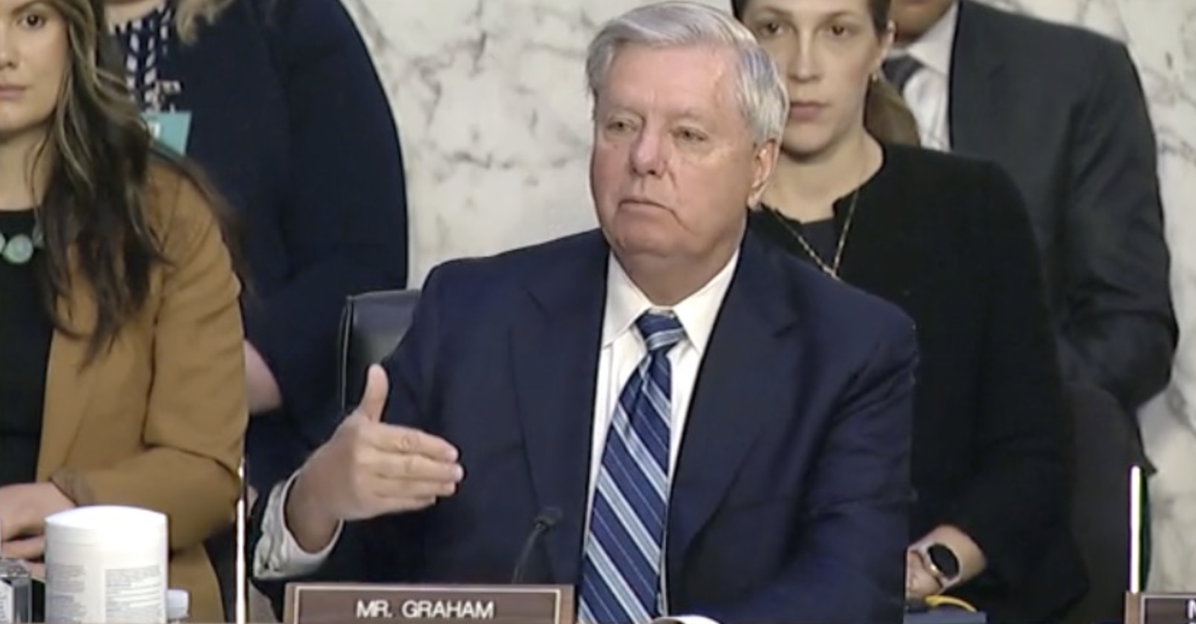 Senate Majority Leader Charles Schumer (D-NY) says the next vote on Joe Biden's Supreme Court nominee could be TOMORROW. On Tuesday, Schumer announced, "Once I file cloture, the stage will be set for the Senate to close debate on Judge [Ketanji Brown] Jackson's nomination by Thursday. A vote on final confirmation will then follow."

The Hill reports that the Senate is "on a glide path to confirm her by the end of the week. Schumer's move tees up an initial vote on Jackson's nomination for Thursday, when she would just need a simple majority to move forward."

When and if Mr. Biden's SCOTUS pick gets the 50 or more votes she needs, Senators would then have an additional 30 hours to debate Judge Jackson's lifetime appointment to America's High Court. If lawmakers utilize all that debate time, the final vote on her confirmation is expected on Friday.

Time is running out for "America First" patriots to demand three RINO Senators and at least one "moderate" Democrat join the rest of the GOP in voting against Joe Biden's nominee. If you want Senators to vote AGAINST confirming an "activist" judge to America's highest court, you can INSTANTLY make your voice heard!

Click here or on the banner below now to IMMEDIATELY send your personalized "Vote No!" faxes to Senators on Capitol Hill:

A final vote on Judge Jackson's nomination is expected within the next 48 hours! If you don't support Joe Biden's SCOTUS pick, use the time remaining to make your voice heard. Call key Senators at the numbers below, or fax Capitol Hill now!

Again, "America First" patriots have LESS THAN TWO DAYS to convince three RINOs and at least one "moderate" Democrat Senator to change their votes! To send your own faxes, click here for a list of Senate FaxFire targets and their contact information. Thanks, in advance, for taking immediate action.

P.S. Time is running out to prevent confirming a nominee who Sen. Lindsey Graham (R-SC) calls "activist to the core." Learn more about his opposition to Judge Jackson in this morning's Supreme Court update below. Again, a FINAL Senate vote could happen TOMORROW! Click here or on the banner below to IMMEDIATELY send your personalized "Vote 'No!' On Biden's SCOTUS Pick!" faxes to Capitol Hill now:

Three RINO Senators (Republicans In Name Only) are about to hand Joe Biden a "major win" heading into the midterms. Susan Collins (ME), Lisa Murkowski (AK) and Mitt Romney (UT) have all announced their intention to support Mr. Biden's nominee, Judge Ketanji Brown Jackson, for a lifetime appointment to the Supreme Court of the United States (SCOTUS).

Their decision is infuriating to many "America First" patriots for three reasons. First, Romney voted AGAINST Jackson's appointment to a lower federal court less than a year ago. Second, Collins voted against President Donald Trump's SCOTUS nominee Amy Coney Barrett in 2020. And third, Murkowski gave a thumbs down to Brett Kavanaugh two years before that.

But all three RINOs are just fine with confirming an "activist judge" who Sen. Ted Cruz (R-TX) thinks "will prove to be the most extreme and the furthest-left Justice ever to serve on the United States Supreme Court." Click here to fax Senators now.

Sen. Lindsey Graham (R-SC) voted in favor of Judge Jackson's appointment to the federal bench in June of 2021. But FOX News reports: "Graham has voted to confirm nearly all of Biden's judicial nominees, and he explained that Jackson is too far to the left for him to continue that trend." During the Senate Judiciary Committee meeting on Monday, the sometime-RINO said:

"I'm inclined to vote for judges of the other side, but this choice of Judge Jackson was really embraced by the most radical people in the Democratic movement to the exclusion of everybody else. After four days of hearings and hearings, I now know why the Left likes her so much."

While Jackson would be the first black woman to serve on the nation's high court, she has been criticized for what Senate Minority Leader Mitch McConnell calls "judicial activism." The Harvard graduate has a record of weak sentencing for child-sex offenders; was unable (or unwilling) to define what a "woman" is; refused to condemn Democrat efforts to "pack" the High Court; apparently supports divisive Critical Race Theory; and failed to disclose whether or not she believes Americans' "natural rights" come from God or the government.

A final confirmation vote on Judge Jackson's lifetime appointment is just hours away! If you do NOT want to see the United States Senate confirm Joe Biden's Supreme Court nominee this week, here are two things you can do, right now. First, call the "crash" of RINOs and key moderate Democrats now. Demand they vote "No!" on confirming an "activist judge" to become an Associate Justice on America's High Court.

During Judge Jackson's confirmation hearing last week, Graham shared what he called "Exhibit A of activism" in her record. In 2019, she ruled against the Donald  Trump administration in an immigration case that was overturned later by the D.C. Circuit Court of Appeals. The Senator brought up the case again on Monday:

"She took the plain meaning of the statute, set it aside, did legal gymnastics to basically issue a temporary injunction. That, to me, says everything I need to know. ... She wants an outcome. She's going to find it. She's going to get it. Activist to the core."

"America First" patriots have just hours left to convince three RINOs and at least one "moderate" Senator to change their SCOTUS vote! Leftist Democrats may be willing to overlook Jackson's controversial court rulings, weak criminal sentencing and other legal shortcomings by voting in favor of her lifetime appointment to the Supreme Court. But should Republicans and moderates? Click here to fax Senators now.

For only $30, you can instantly send your personalized "Vote 'No!' On Biden's SCOTUS Pick!" faxes to EVERY Republican Senator and moderate Democrat Sens. Kyrsten Sinema of Arizona and Joe Manchin of West Virginia (52 faxes). "Go the extra mile" and reach all 100 U.S. Senators for only $50. To maximize the impact of this FaxFire, we're offering team-member discounts of up to 50%!

Click here to fax Senators now if you want them to oppose Mr. Biden's nominee. "America First" patriots must take action if they want to stop Judge Jackson's confirmation. To send your own faxes, click here for a list of Senate FaxFire targets and their contact info. Thanks, in advance, for making your voice heard.

P.S. Again, if you want Senators to vote against Mr. Biden's pick to replace retiring Justice Stephen Breyer, take action now! While Judge Jackson would be the first black woman to serve on the Supreme Court of the United States, many Americans fear she would be an "activist" Justice. Click here or on the banner below if you want the Senate to vote against Mr. Biden's nominee THIS WEEK: