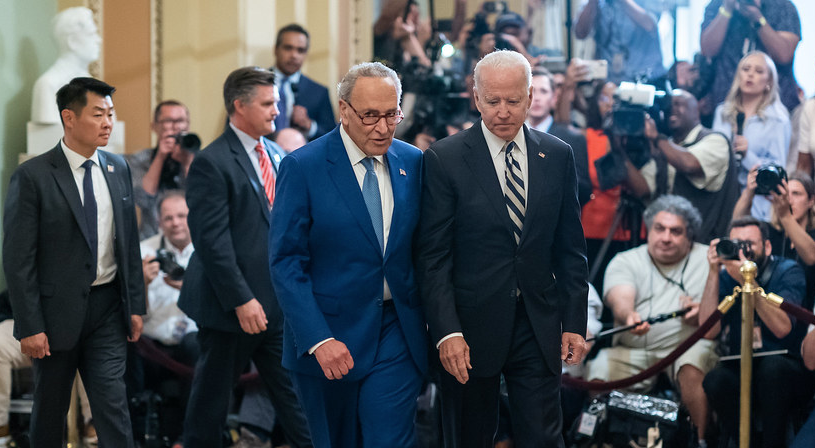 Just minutes ago, at 11:45 a.m. ET, Grassfire received an email from the office of Senate Minority "Leader" Mitch McConnell (R-KY). The second sentence of that message immediately got our attention. The first sentence announced that Senators will convene at 3:00 p.m. ET. The second line read:

At 5:30 pm, the Senate is expected to proceed to a roll call vote . . . on something. Procedural vote on legislation? Nomination? America's Got Talent? I really don't know. (Emphasis theirs)

Within five minutes, Grassfire staff replied to that email, asking if today's vote on "something" could be gun control. We received an answer one minute later:

Yes – depends on text being released.

As of this writing, the text of the Senate's gun-control bill STILL hasn't been released! So, with only the expectation that the legislation will become public today, Senate Majority Leader Chuck Schumer (D-NY) is "expected" to vote on it -- even though Senators likely won't have time to read the entire text.

Over the past two weeks, Grassfire has been warning you about efforts by the Biden regime, radical Democrats and Senate RINOs to infringe on your constitutional right "to keep and bear Arms." Today could be a big, first step in successfully attacking the Second Amendment.

Why? Because 11 Senate RINOs have already said they'd support the framework of a gun-control bill that didn't exist -- and, technically, still doesn't! But we're guessing those 11 "Republicans" will vote yes on whatever makes it to the floor, possibly, this afternoon.

You can stop Democrat and RINO Senators from giving Joe Biden what he wants -- to infringe on the constitutional rights of law-abiding Americans! Take immediate action to protect the Second Amendment and your freedom "to keep and bear Arms." Make your voice heard by using Grassfire's unique FaxFire system to instantly send a personalized "Stop Biden's Gun Grab!" message to Senators on Capitol Hill.

In the time remaining before this afternoon's expected vote, take a stand against the Biden regime's efforts to disarm law-abiding Americans. Send your "Stop Biden's Gun Grab!" faxes to Capitol Hill now. Click here or on the banner below to immediately fax all 50 GOP Senators for only $30, or reach EVERY member of the Senate (100 faxes) for only $50:

Over the past two weeks, we've been warning you about efforts by the Biden regime, radical Democrats and Senate RINOs to infringe on your constitutional right "to keep and bear Arms." Today, could be a big, first step in the ongoing attack against the Second Amendment.

Grassfire is confident the Upper Chamber will "fast track" the gun-control bill so it can be passed THIS WEEK -- before the start of the Senate's two-week, July 4th recess on Friday. If there has EVER been a four-alarm fire that requires the immediate response of "America First" patriots, this is it!

Click here to instantly fax EVERY Republican Senator now for just $30, or reach all 100 U.S. Senators for only $50. Demand they "Stop Biden's Gun Grab!" We've discounted this urgent FaxFire by 40% and 50% to empower you and your fellow team members to make their voices heard. (To send your own pro-Second Amendment faxes to lawmakers, click here for a list of Senate targets and their contact information.)

Thank you, in advance, for taking immediate action.

P.S. Criminals using guns to hurt and kill people is tragic and unacceptable. But the Second Amendment clearly states: "The right of the people to keep and bear Arms shall not be infringed." If you don't want the Biden regime, radical Democrats and Establishment RINOs to infringe on law-abiding Americans ability to defend their lives and property, take action now! Make your voice heard BEFORE today's expected vote! Go here to fax Senators now: