When Fauci and Birx showed us their "we flattened the curve" graph, they were lying and surely knew it 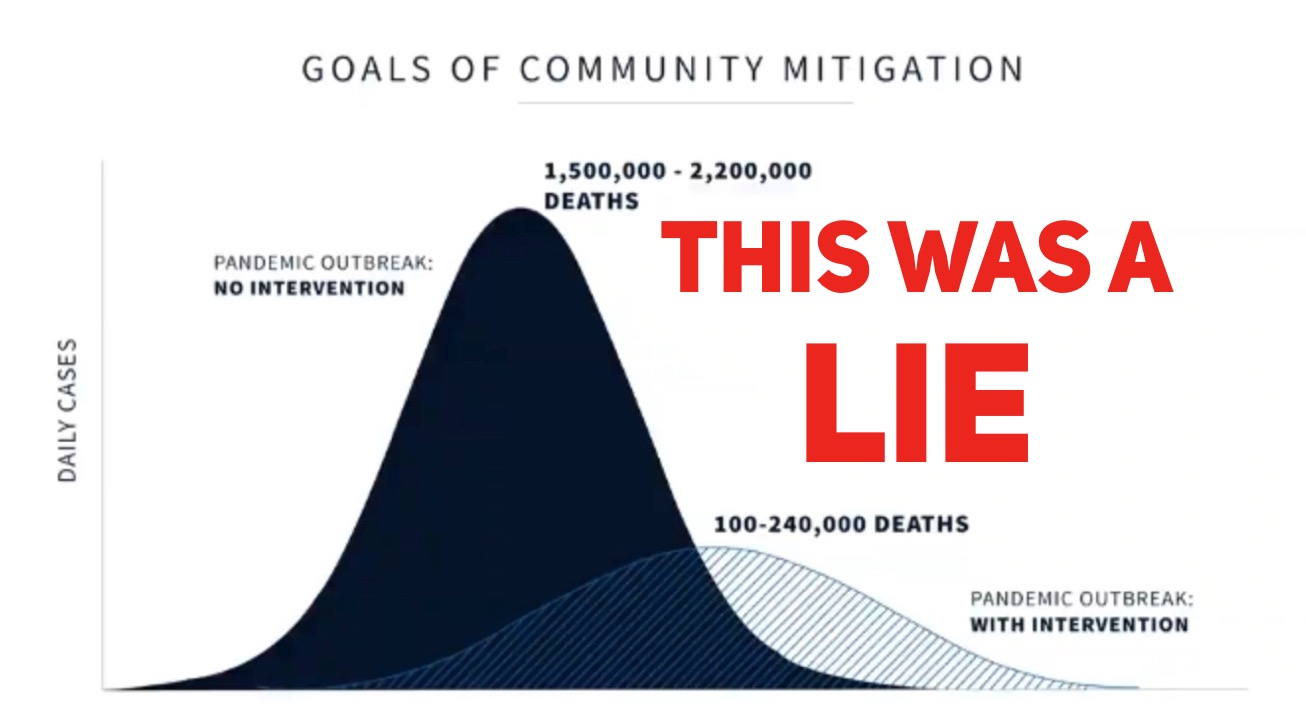 Remember when Drs. Fauci and Birx rolled out their wonderful "we must flatten the curve" graph to show us why we must continue the lockdown so we can save 2 million American lives?

They were lying and they surely knew it. OK. They were deceiving.

First off, the "flatten the curve" model in the long run of a pandemic with a high R value actually spreads out the cases over a longer period of time. The similar number of people get infected. Don't ever forget that the GOAL of flattening the curve was to avoid overwhelming our hospital system, NOT to stop COVID in its tracks. Yes, keeping the hospital system from being overwhelmed would save some lives, but not 90% of those who would have died if we didn't do anything!

Let's reverse engineer this. Since flattening the curve doesn't reduce the number of infections, they are arguing that their "flattening" saved 1.96 million people. If you recall, the real hospital shortage was ICU and more specifically ventilators. If Trump didn't get ventilators to NYC, blood was on his hands!

And here's where the math breaks down...

Only about 12% of those who get on ventilators survive (NYC data). 88% die. So in order to save 1.96 million lives because we have ICU rooms and ventilators, about 14 million would have to have died. In simple terms, having enough ventilators for every patient only decreases the mortalty total by 12%. So on the high end of the revised projections (240,000 projected deaths), ventilators would save 32,000 lives -- significant but far short of 2 million. Based on the current projection of around 68,000, ventilators will save about 10,000 lives. Again, significant but not quite 2 million.

Sure, there are plenty of other factors in a hospital shortage that could cause the mortality rate to increase, but let's see the evidence to prove that mortality could increase by a FACTOR OF TEN (from 240k to 2.2 million) because of those shortages. Remember, the same number of people GET COVID-19 ultimately even if you successfully flatten the curve. The number of lives saved could be significant but not likely a TENFOLD improvement.

And then there's this. Take a close look at the Fauci/Birx graph and notice how much SMALLER the area under the mitigation curve is...

Yes, we are comparing "apples to oranges" because the Fauci/Birx graph is DEATHS and the WHO graph is CASES.

Yes, there may be some reductions in deaths, but that wasn't the primary goal. How do we know? The WHO said so! Here's what the WHO said in direct reference to their "flattening the curve" graph:

By reducing transmission in the community, the epidemic may be spread out over a longer period, with a reduced epidemic peak. This can be particularly important if the health system has limited resources or capacity (e.g. in terms of hospital beds and ventilators). Also, overall morbidity and mortality can be reduced even if the total number of infections across the epidemic is not reduced.

The primary goal is to "spread out" the epidemic over a longer time interval. Secondarily, "overall morbidity and mortality can be reduced" by flattening the curve. The WHO then threw a bone towards "interventions" that "may aim to reduce the total number of infections." But by a factor of TEN? Not likely, especially since the WHO's full report gave little actual hope regarding the actual impact of a host of proposed interventions (more on this soon).

So what happened so that Fauci and Birx could magically claim to have reduced the potential death count from 2.2 million to 100-240,000? The geniuses at Imperial College in London had already realized that their original "2.2 million" projection was bogus so they adjusted things down a bit. Well, a lot. By a factor of TEN. So Fauci/Birx announced the BIG FEAR numbers and noted that the lockdown/shutdown was going to save 2 million lives.

And now they fight against the grassroots movement to re-open America by sending the not-so subtle message that people like us want to kill those extra 2 million Americans their heroic efforts just saved.