"I believe [Daryl Morey] wasn’t educated on the situation at hand and he spoke. ... So many people could have been harmed, not only physically or financially, but emotionally and spiritually. Just be careful what we tweet, what we say and what we do. We do have freedom of speech, but there can be a lot of negative things that come with that too."

It was another chaotic weekend in Hong Kong, as pro-democracy activists again clashed with police. Tear gas and water cannons were used to disperse crowds who reportedly set fires and threw Molotov cocktails at law enforcement.

The protests that began four months ago are intensifying in the run-up to tomorrow's 70th anniversary of the founding of the People's Republic of China. On Saturday, FOX News contributor and former House Speaker Newt Gingrich weighed in on the demonstrations, writing:

As the Hong Kong protests continue and calls for freedom become more widespread, the United States now has an opportunity to take action.

More than 20 years after the British handover of Hong Kong to China in 1997, the high degree of autonomy and freedoms promised to the Hong Kong people have been suppressed and violated by the ruling Chinese Communist Party. ...

Leaders in Congress on both sides of the aisle have made strong statements condemning the Chinese and Hong Kong governments' exploits – but now is the time to attach action to words.

Pro-democracy demonstrators and police squared off again in Hong Kong over the weekend. Protests that began four months ago have become more violent recently.

The Wall Street Journal reports that, on Saturday, "Protesters threw Molotov cocktails and police fired tear gas and made several arrests. ... The march in the Tuen Mun neighborhood, which was approved by authorities, started peacefully as thousands walked down a main street, with some waving flags from the U.S. and other democratic countries. At one point, however, protesters gathered at an intersection along the route to yell at nearby riot police, who eventually charged to disperse the crowd."

No one wants another Tiananmen Square massacre. The recent protests in Hong Kong are bringing to mind the 1989 student-led demonstrations in Beijing that left at least 300 dead. China has a history of taking a hard line against dissidents and others critical of the Communist regime.

President Trump has taken action to support the protestors, and Grassfire is empowering our team members to tell Congress to follow the Commander-in-Chief's lead. Yesterday, we launched the "Stand With Hong Kong" national petition to give you an opportunity to support the men and women demanding independence.

PETITION To "Stand with Hong Kong!" 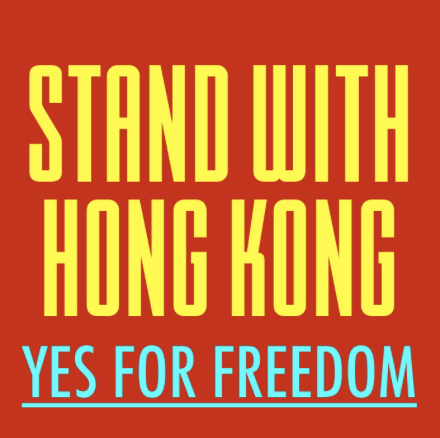 These brave freedom fighters are singing our National Anthem and waving the American flag -- and asking for the people of the United States to stand with them!

There is a bill in Congress called the "Hong Kong Human Rights And Democracy Act" that would exert the pressure of the U.S. government in support of Hong Kong autonomy against China.

Grassfire has created this national petition so you can let Senators know where you stand on the issue of Hong Kong autonomy and this bill. Simply complete the form below to add your name.

As an independent, liberty-loving, patriotic American, I stand with the Hong Kong freedom fighters. They have honored us by singing our national anthem and waving our flag during their protests for autonomy from China. I choose to honor their bravery and resolve by signing the national "Stand With Hong Kong" petition. I urge you, a duly elected member of Congress, to take immediate action to use the power and influence of the U.S. government to urge leaders in Beijing to loosen restrictions, relinquish control and increase freedom in Hong Kong.